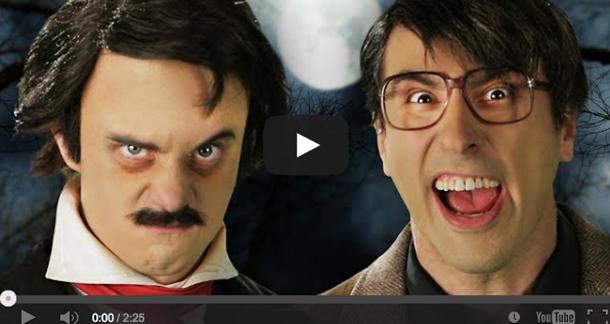 This is it. The one horror fans have been waiting for. An epic throwdown of linguistic prowess between two masters of the genre: the lugubrious Edgar Allan Poe vs. Stephen "The King of Horror" King....

Who won? Poe's got that rapid fire delivery, but King's puntastic use of his own book titles is pretty great. Sound of in the comments... in verse.

To me, does it honestly really matter who your favorite author is? Its an individual taste thing.

No I got that its about their skill and delivery. What I'm getting at is different forms of dlivery work for different readers.

The post itself, therefore hasn't much of a point.

The take away is there wasn't any clarity.

Joshua Chaplinsky from New York is reading a lot more during the quarantine June 4, 2014 - 8:23am

They were both awesome, but I have to go with Poe because I freaking love George Watsky. Not to mention, I like that he refers to King's writing process as "This jerk just beats off on a page". Some of King's books feel like that to me, though I do love many of his older works. This was one of my favorite Epic Rap Battles.

Moderator
Utah from Fort Worth, TX is reading Lonesome Dove by Larry McMurtry June 5, 2014 - 5:41am

I thought that I had become callus, but occasionally the comments-under-the-article still leave me momentarily speechless.