Keeping Up with the Jameses: Forbes' List of Top-Earning Authors 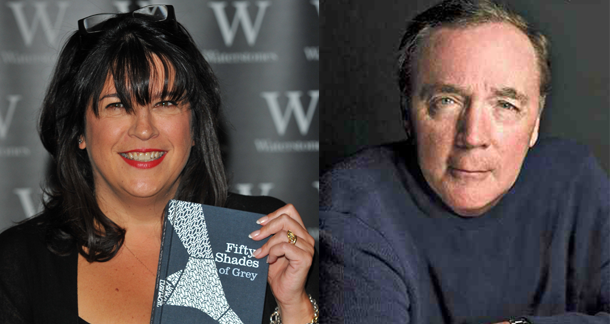 As a relatively new writer, it’s always interesting to see how the Stephen Kings and J.K. Rowlings stack up on the annual Forbes list of top-selling/earning authors. Perhaps no surprise is the debut of Fifty Shades of Grey author, E.L. James, who earned $95 million dollars in the last year. While I can imagine quite a bit (to quote Han Solo), that’s a staggering sum for a writer who was unknown a very short while ago.

Perhaps not so surprising is the no. 2: James Patterson. As the article says:

To really be assured of the millions, you’ll want to crank out the titles at a furious pace of five or more a year. That’s the not-so-secret secret of mega-authors like James Patterson (No. 2 on our list with $91 million in earnings between June 2012 and June 2013) and Nora Roberts (No. 8, $23 million).

I do wonder (cynic that I am) how much Patterson actually writes these days, as it seems like most of his books include another author’s name — is he just cashing in on his work/characters/reputation? Oh, to be in that position…

The list is an interesting mix of long-established authors like Stephen King (no. 10) and Danielle Steel (no. 5) and nouveau riche authors like Suzanne Collins (no. 3) and Dan Brown (no. 9). The purists out there will argue this is about popularity rather than quality — of course it is: this list is about who’s sold the most books, film rights and made the most money. Here’s the list of the top 15, if you’re interested.

While I admit to being envious, I’m not surprised at the list — although I have to admit to having never heard of one or two of them, but that’s probably because I’m old. Any surprises for you? Anyone you think is missing?

I'm surprised to see Danielle Steele on the list, I didn't realize she was still a dominant name in her genre. I'm REALLY surprised to see Bill O'Reilly up there, I wouldn't have thought politically based opinion books would have that wide appeal, though if I remember correctly, he pumps out a few a year, too, so that may have something to do with it.

Joshua Chaplinsky from New York is reading a lot more during the quarantine August 14, 2013 - 9:53am

I think Patterson is more of a brand than an author at this point.

I'm not surprised about Dean Koontz. I see his books everywhere.

O'Reilly wrote a couple of "history" books about Lincoln and Kennedy's assassinations, that's why he's there.

I wonder which ones Dean didn't know. I'd personally never heard of David Baldacci. Anyone know whether I've missed anything? (Probably not, considering that I could go the rest of my life without reading another book by the other fourteen.)