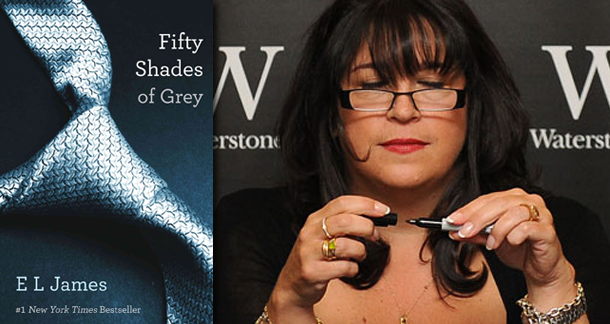 There’s teasers and then there's teasers. I think this classifies as a big tease: in an interview with Entertainment Weekly about the upcoming movie version of her book, Fifty Shades of Grey, E.L. James announced she’s finished a new book. That’s about it. Oh, and she’s just reconfirmed that it’s got no less sex in it that Fifty Shades…

"What I’d really like to be doing is sitting down in a little room writing my next book," she said, after talking about the craziness surrounding the upcoming film version of her bestselling novel. "I miss it so much." James then clarified that, in fact, she's already finished. "I've written another book," she said, though as for whether she'll publish it soon, she could only say, "I don't know."

Huh. Most authors talking about new work would be spilling the beans with gusto, but then James does seem to realise that the fan base for Fifty Shades… may not like anything too different, even going so far as to say she might publish her next book under a pseudonym. And her fears extend to the movie adaptation as well — James admits she’s “terrified” of what will happen when it’s released.

"Do you think fans will hold you responsible if they don’t like the movie?”

“Oh God, of course they will. They hold me responsible for everything.”

The film hasn’t even started filming yet, but the expectations from fans and critics alike are mixed. In terms of her new book, the answer seems to be ‘watch this space’. If it does get published under her name, it’s fair to say we can expect a reaction similar to the one for J.K. Rowling’s Casual Vacancy. I guess the question I’ve got is: should we feel sorry for her? She’s already made a ton of money and sold a shedload of books, so it is a little hard to feel sympathetic.

Class Director
Rob from New York City is reading at a fast enough pace it would be cumbersome to update this November 18, 2013 - 7:59am

Hooray! Another thing for the internet writing community to be irrationally angry about!

I don't mind reading about E.L. James. Her story is more interesting than anything she's written.