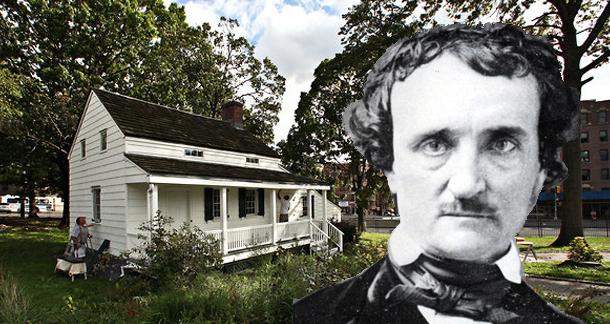 Edgar Allan Poe's Bronx cottage is undergoing renovations, although when it'll open to the public is unclear.

Wait, Poe lived in the Bronx?

Though he was born in Boston and died under mysterious circumstances in Baltimore, Poe spent the last years of his life in a modest Bronx cottage built around 1812, wandering the woods (the Bronx was very different back then) and hanging out with the Jesuits at St. John’s College. It's also where he wrote Annabel Lee, The Bells, and The Cask of Amontillado.

The house, at the Grand Concourse and East Kingsbridge Road in Fordham, is owned by the city, and is currently on the tail end of a half-million dollar renovations project. There's also a nifty visitors' center nearby, with a V-shaped roof and slate shingles designed by Toshiko Mori to evoke a raven. Apparently Poe had a thing for ravens.

Unfortunately, the Bronx Historical Society, which runs the site in conjunction with the Parks Department, can't afford to staff the new center. Neither can the city. And that lack of foresight is already starting to show, according to the Times:

In the middle of the day last week its public bathrooms were locked with a handwritten note that said they were under repair. The sides of the pavilion were scratched, and vandals had begun the work of prying off the slate shingles.

That's sad. Hopefully they get some funding or some volunteers to get this thing opened. Because I really want to go there. I bet it's spooky. How could it not be? Edgar Allan Poe lived there.

Speaking of Poe, has anyone seen this? The Raven? It's a movie starring John Cusack as Poe, in which the writer pursues a serial killer mirroring his stories. Coming to theaters this March. It looks stupid, in a sort of glorious way. I will be first in line.

Hahaha. That trailer is awesome.

Little did we know that Edgar Allan Poe was the inspiration for Sherlock Holmes?

Maybe this movie will spur a renewed interest in Poe and get younglings to read his stuff -and then, will they realize how much cooler it is than werewolf/vampire love triangles. Well, that is if they can understand and bear the Goth Lit style.

But let's hope the movie will at least inspire some people to volunteer at the Poe cottage right?

Joshua Chaplinsky from New York is reading a lot more during the quarantine October 27, 2011 - 10:31pm

I live in queens. I would totally visit this house.