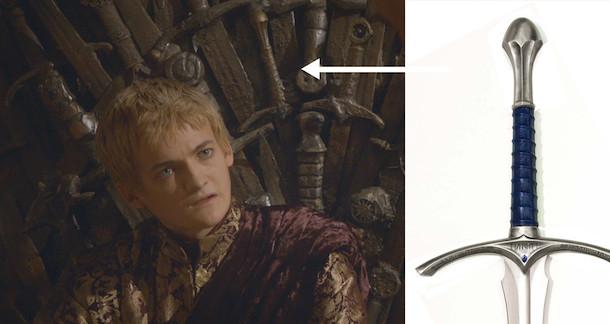 The fabled and much-contested Iron Throne of Westeros in the TV series Game of Thrones has seen many people give life and limb for the opportunity to take a seat on the jagged assembly of a thousand blades of fallen warriors. I guess nobody told them you can just buy one for yourself online, though the wi-fi signal in King's Landing is spotty outside of the brothels.

Though many a notable character in the show and the book series have fallen in pursuit of the throne, it appears that it may have also cost the life of a certain wizard from Middle Earth.

In a thread on Reddit, user NoMoreHodoring discovered that Gandalf's legendary sword, Glamdring, has a prominent place in the Iron Throne on the TV series, situated directly behind the king:

While it's pretty certain that the sword was used as a inside joke or a nod to another monumental fantasy series by the set designers of Game of Thrones, the idea of a long, convoluted history where all epic fantasies are part of one gigantic shared universe of chaos and death seems like the more fun answer.