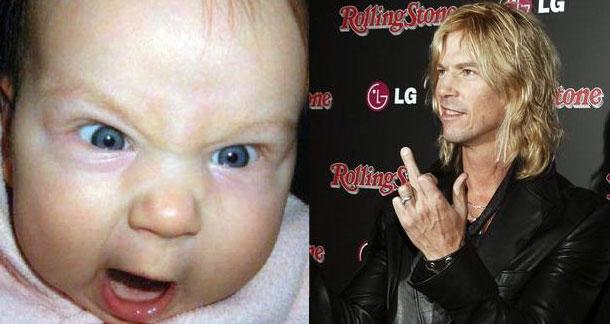 Don't you just hate it when you're trying to have a book signing and then some dude that's completely nutter butters tries to crash the party?

That's what happened last Friday at the Duff McKagan signing for his new memoir entitled, It's So Easy: And Other Lies.  The video pretty much illustrates how much a douche this guy was being, but some background information is needed to fully understand what's going on here.

The audience member asks the following questions:"Was he depressed on the airline?" and "Was he despondent?  Was he in despair?"

He's referring to Nirvana's frontman, Kurt Cobain.  Why he's asking McKagan about this is because he's considered to be one of the last people to actually talk to the guy before he died, specifically, in the first class section of a flight going from L.A. to Seattle.  Cobain had just left a rehab facility and the two musicians had some dialogue on the plane.  A few days later, Cobain's body was found in his Seattle home.

Back to the incident.  The questions the guy is trying to ask McKagan aren't out of line, in my opinion.  The problem is the way he went about it, almost as if he were trying to put McKagan on the spot by approaching the stage with a handheld video camera.  It's obvious he was trying to rattle the guy (and possibly get some embarrassing footage), so I commend McKagan for staying cool for as long as he did.

Then there's this little gem of dialogue: "Get your hands off me before I knock your ass down, motherfucker!"

McKagan lays the hammer down: "Get the fuck out of here, motherfucker!"

And the crowd goes wild.

Check out the video and let us know how you think McKagan handled this one.

Apologies for the quality and angle.  It's the best footage we could find.

Daniel Donche from Seattle is reading Transubstantiate, by Richard Thomas October 24, 2011 - 10:22am

I think the questions were fine, too, and the way Duff handled it was also fine. There are a lot of Cobain fans, especially here in Seattle, who might actually blame Duff for Kurt's death, given the fact that Duff actually recalls noticing that something was wrong (on the plane). I also know that a lot of Cobain fans hate GNR, of which Duff was the bassist, and since Cobain also hated glam rock, and wasn't really a friend of Duff, they sometimes lump all this shit together in their passion and I can see how having one of the last people to see Cobain right in front of you might throw a guy off-kilter. So...fair questions, but yet unfair if there is an underlying current of blame towards Duff.

Same thing happened to me at my first book signing. I should have done the exact same thing, but the individual just would not leave.

Joshua Chaplinsky from New York is reading a lot more during the quarantine October 24, 2011 - 4:52pm

I have a pretty decent Duff anecdote.

A friend and I went to see The Duff Meister read at a store out on Strong Island a few weeks ago. We tried to get another friend to come along, but he stayed home because he was lazy. His birthday was the next week, so I bought him a copy of the book and got on line to have it personalized. As we got closer I noticed Duff was just saying hi, scrawling his name, and posing for a quick pic. So when it was my turn, I was immediately all, Wait! Duff! This is for a friend who didn't want to leave his house. Can you make it out to [insert friend's name] and write, "You're a lazy ass motherfucker. Stay home and wash your panties you jerk!" or something to that effect.

All of a sudden, some cunty britches bookseller (not even one of Duff's people!) was like, Whoa, whoa, whoa! He's not gonna write that! and gave me a reproachful look. I was dumbfounded. The man was in Guns n' fucking Roses, he wasn't gonna balk at scribbling a few cuss words. But she wouldn't let him do it. He wound up writing "You're a jerk!" and left it at that. I was furious, but there were so many people on line and they were rushing us through, so I really couldn't raise a stink. Needless to say, I was very disappointed.

Joshua Chaplinsky from New York is reading a lot more during the quarantine November 19, 2011 - 10:13am

Finally, the blown out PROOF. Right after this pic, Duff asked me if I had just touched his butt. 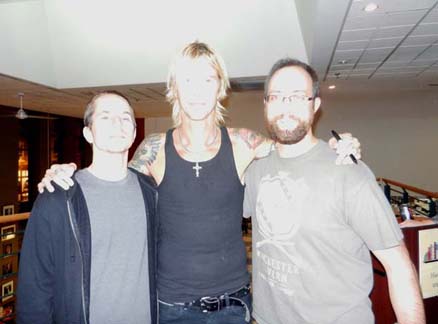