Down With Trolls: Author John Scalzi Turns Insults Into Charity 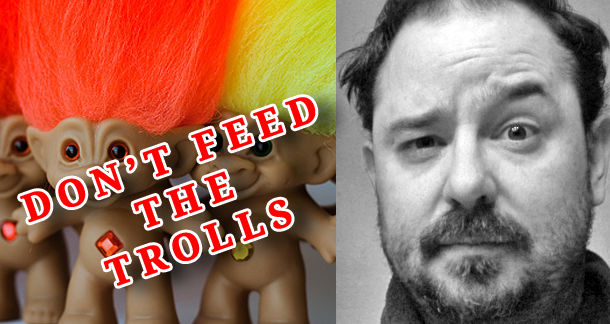 Everyone’s seen a troll on these here interwebs : they’re the lurkers who often mutter something profane, inexplicable or simply annoying where others are participating in a rational discussion. Well, sci-fi author John Scalzi is fed up with one in particular, the one he’s dubbed 'Racist Sexist Homophobic Dipshit'. For every mention of Scalzi’s name or “one of his adorable nicknames for me”, he’ll put $5 in a pot and at the end of the year he’ll divvy up the accumulated money between four charities.

Scalzi put a ceiling on his "troll tip jar" of US $1,000, figuring that gave his bête noir 200 opportunities to abuse him over the coming year, and said he'd give the cash to four charities: RAINN, America's largest anti-sexual violence organization; Emily's List, dedicated to electing pro-choice Democratic women to office; the Human Rights Campaign, which works for Lesbian, Gay, Bisexual and Transgender Equal Rights; and NAACP: America's oldest and largest civil rights organization.

What the president of the Science Fiction and Fantasy Writers of America wasn’t prepared for was the reaction from his friends and connections on Facebook and Twitter who all asked if they could help out, too. And as some of them are famous in their own right, many of whom (like Will Wheaton of Star Trek fame) have offered to match his $1,000. By Tuesday morning, more than $50,000 had been pledged.

The 'Racist Sexist Homophobic Dipshit' apparently started targeting Scalzi after the author wrote a satirical blog entry about conservative politicians and their stance on abortion. Scalzi seems pleased with the response, too - he’s even commissioned artwork for the contributors.

I’m not surprised that people wanted to sign on for this, no… The science fiction and fantasy world has as one of its cornerstones the idea of 'pay it forward' – the idea that you help people, not for what you get out of it, but to help others so they may help those who come up after them. This is paying it forward in action, and I'm proud I get to be part of it.

This is a great idea and as Scalzi’s asked contributors to donate 5% of their pledge, the charities will still get contributions even if the dipshit stops mentioning him. You can pledge, yourself, just go to Scalzi’s blog and add your support.