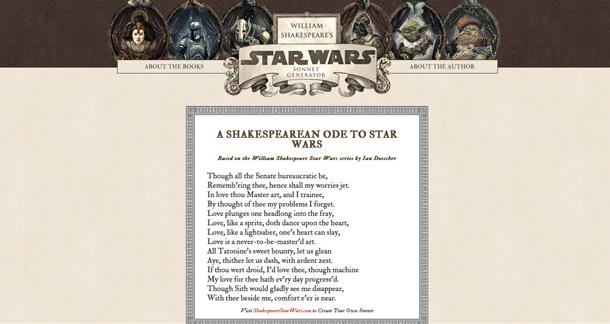 The widget allows users to express their love of Star Wars through a 14-line poem in iambic pentameter. To generate the sonnet, you must first answer four questions, including your preference between the original and prequel trilogies, and whether Tatooine or Naboo would be your preferred romantic destination.

William Shakespeare’s Star Wars series, penned by Ian Doescher, translates the plots of the Star Wars movies into Shakespearean-style plays. The sixth installment in the series, Tragedy of the Sith’s Revenge, was released this past week, and is available for purchase now.

Visit William Shakespeare’s Star Wars Sonnet Generator to create your own ode to the franchise, and feel free to share the poem below!