Despite Big Gains in 2011, The eBook Age Still Has Some Major Holdouts 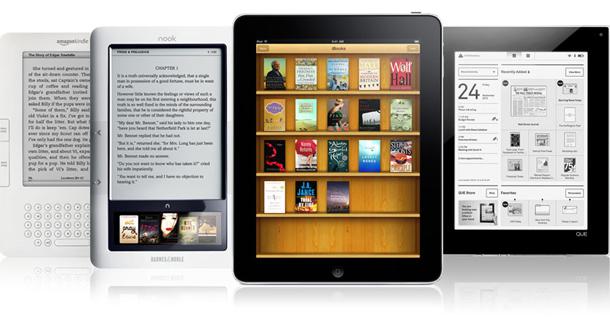 via The Associated Press:

During 2011, eBooks grew to about 20 percent of the book-buying market, and that number is expected to rise at a good clip throughout 2012, considering everyone is coming out with a tablet and Amazon is moving a million Kindles a week. (I should know. Just got one!)

Famous holdouts like J.K. Rowling and Ray Bradbury finally made the digital transition, as did classic novels such as Alice Walker's The Color Purple and Joseph Heller's Catch-22. Plus, Mulholland Books is publishing Jim Thompson's entire library in eBook format, which is super exciting.

That being said, there are still a couple of big holdouts--books that have yet to make the big move over to electronic formats:

So there you go. Those are the big holdouts. Does anyone have anything to add? Any books you've tried to load onto your Kindle/iPad/Nook/toaster just to find out that they're unavailable?

I would love an ebook version of Gravity's Rainbow, because the unofficial one I have is awfully formatted and full of typos.

Joshua Chaplinsky from New York is reading a lot more during the quarantine December 19, 2011 - 9:19am

House of Leaves would be interesting. Linked footnotes would save a lot of back-and-forth page turning.

Hetch Litman from Somewhere in the mountains of the Pacific Northwest is reading The Violent Bear it Away by Flannery O'Connor December 19, 2011 - 9:25am

Super stoked to see that Jimmy Thompson's entire library is coming up! Already have an iPad but the backlight is more uncomfortable to read on after an hour or so. I'm picking up a Nook touch tonight. I really like the e ink.
Great article. Thanks.

Jack from England is reading texts of rejection from pretty ladies December 19, 2011 - 10:36am

I would like Gravity's Rainbow very much. Also The Man Without Qualities, because I'd very much like to read it, but it's all big and heavy. It's not because I'm intimidated by its prestige, it's not that. It's just too big.

HoL isn't far off from being an ebook...

Chester Pane from Portland, Oregon is reading The Brief and Wondrous Life of Oscar Wao by Junot Diaz December 19, 2011 - 6:01pm

A million Kindles a week?

If only a fraction of those get used, that would mean a lot of reading.

I like seeing illustrations on the Kindle, how they are reduced to simple black and white block prints. Kind of like the old-school newsprint illustrations.

I would really like to see more novels take advantage of that. One shortcoming I find with e-readers is the experience of reading a graphic novel or comic. The format is a trifle small thereby altering the experience drastically from one medium to the other.

If only someone would come out with a less portable model equipped with a bigger screen that had non-glare, non-gloss image capability and allowed for polychromatic reproductions or CGI works, now that would be something to behold. Reading comics and graphic novels e-listically can at times be quite challenging if not downright ungratifying.

If only a fraction of those get used, that would mean a lot of reading.

All the reports/studies indicate that people who own eReaders not only read more books than the average person, they also buy more of them.

Amazon has in the past released some interesting facts, and based on what they have seen supposedly

Amazon, the biggest seller of e-books, says its customers buy 3.3 times as many books after buying a Kindle, a figure that has accelerated in the past year as prices for the device fell.

I know this to be true to me personally. I read so much more than I did before getting mine. But really, consider that. Buying 3 times as many books as they used to. That's pretty awesome.

Chester Pane from Portland, Oregon is reading The Brief and Wondrous Life of Oscar Wao by Junot Diaz December 19, 2011 - 6:51pm

Hell yes it is. That is an astounding figure.

And that figure holds true for our household as well, probably thanks more to my teens than myself.

I read about the same amount--essentially all the time, but more and more of it is becoming electronic.