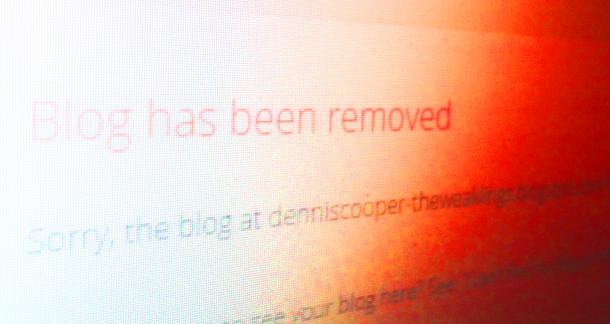 You may have heard that transgressive author Dennis Cooper's blog was taken down by Google without warning or explanation. But have you heard why this matters?

For starters, to call what Dennis Cooper had going a "blog" unfairly relegates Cooper's online work to the world of Pregnant Sonic The Hedgehog fanfic, and doesn't really explain the scope of the loss. For the last 14 years, Cooper has used Blogger to review indie authors, art, film, and to create his own projects such as novels made up entirely of GIFs. He was also working on his newest GIF novel, Zac's Freight Elevator, exclusively on the blog, and all of that material is now lost.

Oh, and because everything is connected to everything else, Cooper's also lost access to his email, which contains his contacts, offers to speak or perform, basically the large chunk of a person's life that we all entrust to email.

The last 14 years of Cooper's work may be unrecoverable, and that's an issue. But the big, hairy issue that applies to everyone is the fact that Cooper's blog was removed with no specific reasoning and completely without warning, and attempts to discuss this with Google have resulted in total stonewalling.

I think this is definitely censorship. The problem is nobody knows what the specific issue is and certainly Dennis has posted images that one might find troubling...It’s just yet another means by which certain members of the government or certain internet conglomerates have decided to make it impossible for culture to be produced.

PEN America, an organization that advocates for writers' freedom of expression, has come out very strongly against Google's lack of transparency and apparent lack of concern for generated material:

Blogs and social media accounts serve as crucial outlets for creative and artistic expression for millions of people around the world, as well as venues for open discussion among interested visitors...Disabling Dennis Cooper’s blog with no explanation and no assurance that his years of work have been preserved undercuts the trust that users place in online platforms that host their work and ideas.

What say you? Censorship? Do you think that if Google has the legal right to do this, they still have the moral right?

The tough question, what possible positive impact could an act like this have?

Dwayne from Cincinnati, Ohio (suburbs) is reading books that rotate to often to keep this updated July 17, 2016 - 3:06am

They have the legal right to do it.

They don't have the moral right.

Well it is google. Still sucks though. I use google myself only to put like genre manifestos and new releases these days. I generally use diaspora or wordpress. At times wattpad as well for fiction.