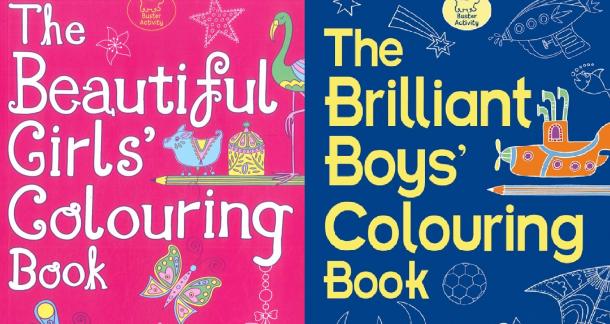 Let Books Be Books, a UK campaign to end the labeling of gender-specific children's books, has been gaining momentum through vocal supporters and an online petition over the last week. As of Tuesday, the petition has found nearly 4,000 signers. Supporters of the campaign include Philip Pullman (The Golden Compass), Britain's Poet Laureate Carol Ann Duffy, and Children's Laureate Malorie Blackman.

The campaign's goal is to ask that publishers stop labeling certain types of books as being "for boys" or "for girls." The campaign's web site makes the statement that series titles like Illustrated Classics For Boys and The Beautiful Book Of Girls' Colouring promote gender stereotypes and put certain titles out of bounds for interested children.

Additional support comes from positive articles in The Guardian, The Telegraph, and from The Independent, who has pledged to no longer review "anything marketed to exclude either sex."

It’s a fact of life how a very large percentage of people shop when buying for kids, do it by sex. We know for a fact that when they are shopping on Amazon, they quite often type in ‘books for boys’ and ‘books for girls.

O'Mara also cites that two of his company's "best" books are The Boys' Book and The Girls' Book, and that although nearly 4,000 people have signed the Let Books Be Books Petition, Buster Books has sold over 500,000 copies of The Girls' Book.

It should be noted that the campaign isn't necessarily looking to stop publication of any materials. It is simply asking that gender designations be left out of titles and packaging. The campaign brings an important book debate to the forefront, and a challenging one as it seems that some booksellers feel this plea pits the ethics of gender neutrality against the classic motivator, revenue.

Comment and share your thoughts, experiences, and if you have them, titles you've enjoyed despite gendered marketing pushing back.

Ugh. I really hate it when publishers are like "Yeah social advancement, whatever - just look at this MONEY!" I mean, we can't just alter them a little bit or change the color scheme, now can we...

I once believed as many do that this is a societal gender role association blah blah whatever thing going on.  I never bought into the men trying to keep women down specifically or intentionally (as if we get together in secret meetins and discuss the patriarchal strategy to continued dominance), but rather, it was an ancient social pattern that still survived in some form.

But now I think it's more human nature and sex un a subconscious level.  Boys are lauded for being brilliant because that is (theoretically) the means to success.  At the most basic, are women are not attracted to successful men?  You know, providers, money, and all that.  Alphas and great leaders are rarely stupid.  Hard to say, they're the more complicated gender.  Men are much simpler, we like beautiful women.

Joshua Chaplinsky from New York is reading a lot more during the quarantine March 19, 2014 - 1:29pm

If a boy wants the "girls'" coloring book, buy him the girls' one. No need to resort to PC bullying.

Because I care about what a sheeple reading propaganda news outlet thinks. Arent these the same people campaining for like moore diversity in books set in the 1800's?

Next we will be seeing complete historical rewrites.

If they cared about civil rights, you can do more effective things for trans people.

Marketing to my daughter based on her looks rather than her intelligence makes me want to vomit. I have to say that I feel comfortable judging the hell out of a company for publishing these and would probably judge a parent for buying them. This is on par with the "Boys are better than books" shirts. I don't think we need or want a generation of vapid women who only care about their looks.