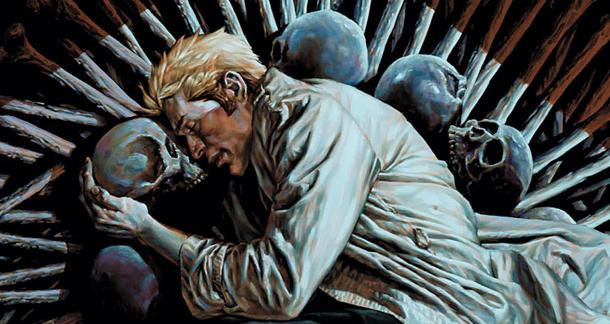 NBC is moving forward with a television show based on the DC Comics character John Constantine. Which normally would make me happy. A TV show about a snarky occult detective fighting demons is my jam. But then I saw who was writing it.

Goyer is the guy who wrote Man of Steel, a Superman movie that's not appropriate for children. The guy who wrote the Nolan Bat-films, which are okay, but in 10 years people will be embarrassed to have defended them so vociferously. The guy who wrote and directed Blade 3, the worst installment of the storied Wesley Snipes franchise. So, I don't have high hopes, but hey, you never know.

John Constantine is a foul-mouthed, cynical Brit who first appeared in an issue of Swamp Thing in 1985. He was created by Alan Moore, Steve Bissette, and John Totleben, and visually based on English musician Sting. He eventually got his own title, Hellblazer, the longest-running and most successful comic in DC's Vertigo imprint.

The character was brought to the screen in the 2005 Keanu Reeves film Constantine, which re-imagined him as a slightly-less-assholey American. I caught it on cable a few months back, and you know what? It's not terrible. Not great. I give it a few extra points for Peter Stormare's portrayal of Lucifer.

This project would kind of, in spirit, compete with AMC's possible Preacher series, which I am way more excited about. Fun fact: Preacher was written by Garth Ennis, who also wrote a few dozen issues of Hellblazer.

What do you guys think?

Goyer's Da Vinci's Demons was probably my favorite thing on TV last year. He's hit or miss but at least every one of his projects is good on paper, if I can grant him that.

Love Hellblazer, probably the most influential work on my creative lifestyle, and the Garth Ennis years are particularly the best thing in comics to ever exist. I'll keep my optimism/youthful naivete for both this show and Preacher, hopefully they are sick. It'd be my teenage dreams come true just to watch these.

In what universe it is not retarded to defend Constantine while at the same time criticizing the Nolan's Batman films? Why do you complain that this guy wrote a Superman that is not for kids, when clearly Hellblazer is aimed at a mature audience? You forgot to mention he was one of the writers of Dark City and he also wrote Blade 2 (which wasn't THAT bad).

Class Director
Rob from New York City is reading at a fast enough pace it would be cumbersome to update this January 14, 2014 - 11:36am

A couple of quick notes, Ivan. First, I'm not comparing the films. Second, I said Constantine was not bad, but also not great. Third, my problem with Man of Steel was that Goyer completely misunderstood the character of Superman, which damages my faith in his ability to adapt anything. Finally, your use of the word "retarded" is stupid and offensive.

And I really liked Blade 2, though most of the credit there is due to Guillermo del Toro.

You are correct regarding Blade 3 and Stormare. Everything else, not so much.

Hellblazer could be a cool show. I tend not to like the TV narrative model so much. If they do one-shot episodes with the occasional big picture episode (like the X-Files did for a while), I could be into it; but if it's "cliffhanger every week"-style storytelling, I can't watch it.

Dark City rules, although the director and Lem Dobbs are both also credited as writers.

I have to agree with Rob on most of this. The first two Blade movies were ok at best the third was terrible and it was Goyer's fault. The Constantine movie missed the point entirely and the option from that film is still in play and basically the only reason why we are getting a show now. Goyer is becoming the "go to guy" for DC related movies and TV and i'm not sure that is such a good idea.

The Nolan-bat films are only OK?  We'll be embarassed to have defended them?  Can't say I agree with that sentiment - Batman Begins is barrelling down on 10 years and I think it's holidng up, and it's the weakest of the 3.  I think to some degree its subjective (duh) particulalry to those who may consider themselves a "purist" or those more ammenable to "re-imaginings".  I also found the Superman movie to be good, not great - though for the life of me I don't understand how Batman could stand a chance against him in the new movie (I don't follow the comic, if the source material actually exists for this storyline).

Can't argue about the meh nature of the Constantine movie and the disappoinment of Blade 3.

But if you put him on the small screen on NBC, got to say I'm probably going to check it out and see what kind of legs it has (NBC did give us Hanibal, so they have a little street cred at the moment - please don't mention all their "misses", I"m well aware).

Dwayne from Cincinnati, Ohio (suburbs) is reading books that rotate to often to keep this updated January 16, 2014 - 8:45am

I am just hoping when they screw it up, not if but when, they do it so bad that it ends quickly so the source material isn't locked up for years preventing a reboot.

and I thought I was the only one not crazy about the Batman films.  I did like the third the best, but I feel asleep both times I watched the second.