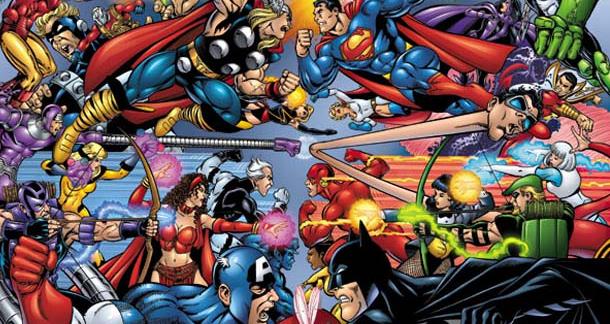 DC has officially slated a Justice League movie for 2015, no doubt jealous of the dump trucks of Avengers-generated money unloading at Marvel headquarters.

The company has been floundering with movie adaptations of its character for years. Green Lantern was a nightmare, and while Christopher Nolan's Batman movies were a huge success (even though they're not that good), both Nolan and Christian Bale are moving on from the character. Meanwhile, Marvel is riding high on the success of The Avengers, with sequels slated for Iron Man, Thor and Captain America, and movies scheduled for both Ant-Man and the Guardians of the Galaxy.

Marvel has also scheduled the sequel to The Avengers for 2015... which means there could very well be two huge superhero blockbusters going head-to-head. That ought to be quite a bit of fun.

Still no word on casting and strategy. The next DC hero to appear on film will be Superman in Zack Snyder's Man of Steel. According to Badass Digest, DC will probably introduce all the characters in the Justice League film, and spin them off into individual films--the opposite of the Marvel strategy, and an idea they've toyed with in the past.

So, let's say they keep Henry Cavill in the role of Superman. They'll probably ditch the Ryan Reynolds/Hal Jordan version of Green Lantern and go with the John Stewart version of the character for the sake of diversity. They have to include Batman, Wonder Woman and Flash. If they're really want to make the nerds happy they'll include the Martian Manhunter.

Who would you like to see cast in these roles? And are you excited about a Justice League movie?

Class Director
Rob from New York City is reading at a fast enough pace it would be cumbersome to update this October 19, 2012 - 12:23pm

Then again, these are just my opinions, and opinions can't really be wrong, can they?

Dino Parenti from Los Angeles is reading Everything He Gets His Hands On October 19, 2012 - 5:12pm

I think it'll depend a lot on how good or bad Snyder's Man of Steel turns out to be. If it's good, The Justice League will have some nice momentum going for it; they can build it around a proven commodity (Cavil and Snyder) and utilize them as the lynchpin for the story. If Superman turns out to be a steaming pile however (I'm hoping not--seems like a good cast at least), they may need to recast Superman so it doesn't carry over the same bad taste. Then again, there's such demand for this project that people will see it in droves either way, at least for the first couple of weekends.

No suggestions for casting. I'd rather they surprise me and go with some unknowns who are very good actors so there's no baggage or weird expectations.

And Nolan's Batman movies, while certainly having their legitimate flaws, are still good--better than good even in many respects.

We could always go back to having Joel Schumacher directing the Batman films. Those were awesome.

If these movies go head to head, I'l bet my life on The Avengers. Joss Whedon. Enough said. I loved Nolan's Batman trilogy, but those are the only recent DC films that have been any good, so I'm not sure how they're planning on competing (unless Joseph Gordon-Levitt has a significant part in it). If they had gone ahead with Whedon's Wonder Woman, they might have had something to go on, but he's going to be too busy turning all the Marvel sequels into awesome so that he can wipe the floor with his own sequel.

JEFFREY GRANT BARR from Central OR is reading Nothing but fucking Shakespeare, for the rest of my life October 21, 2012 - 12:52am

Great story about comic books. Not that I read the article; I'm not 14 and could care less about this nonsense.

Class Director
Rob from New York City is reading at a fast enough pace it would be cumbersome to update this October 21, 2012 - 6:54am

Well, thanks for at least taking the time to comment, Jeffrey. Your contribution is enlightening!

Dwayne from Cincinnati, Ohio (suburbs) is reading books that rotate to often to keep this updated October 21, 2012 - 1:53pm

I think he's been drinking again.

They should go with G'nort for the Green Lantern.

Dwayne from Cincinnati, Ohio (suburbs) is reading books that rotate to often to keep this updated October 23, 2012 - 4:35am