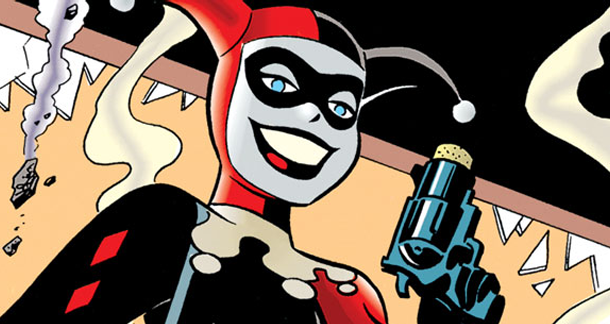 Last week the Daily Dot reported that the comics giant was “offering lucky artists the chance to begin their careers in the industry—if they can effectively draw a naked woman preparing to kill herself”. Sounds like the chance of a lifetime, right?

Harley sitting naked in a bathtub with toasters, blow dryers, blenders, appliances all dangling above the bathtub and she has a cord that will release them all. We are watching the moment before the inevitable death. Her expression is one of "oh well, guess that’s it for me" and she has resigned herself to the moment that is going to happen.

And it was bad timing that the announcement came out just days before the start of National Suicide Prevention Week. The groups associated with the event said they were “disappointed” with DC’s attempts to “make light” of suicide with the contest. I think that’s a polite way to say they were “pissed off”.

Tuesday, Jimmy Palmiotti, the writer responsible for the Harley Quinn scene, posted a statement on Facebook taking credit for not positioning the story properly. Right, like a marketing genius could sell this one. Then yesterday, a spokesman for DC released the following apology:

The purpose of the talent search was to allow new artists an opportunity to draw a single page of a 20-page story. True to the nature of the character, the entire story is cartoony and over-the-top in tone, as Harley Quinn breaks the 4th Wall and satirizes the very scenes she appears in," the statement read. "DC Entertainment sincerely apologizes to anyone who may have found the page synopsis offensive and for not clearly providing the entire context of the scene within the full scope of the story."

Setting aside the big issue that Harley Quinn is “arguably one of the most sexualized” characters in their canon, who thought this was a good idea?!? Is it me, or is that adage about common sense being uncommon getting worse? C’mon DC, stop making the news.

I think people are just getting really good at being offended by things... Even things that aren't real.

We could be pissed that college tuition costs are rising faster than even housing costsin the US, that thousands of pedophiles the world over avoid prosecution simply because they're ministers, or that millions will die of AIDS this year in sub-Saharan Africa even though we now have vaccines that actually work and all it would take is a tiny sliver of the federal budget to solve that problem... but nah, lets get upset over a comic book.

We do have to give DC a tip of the hat, though. They are managing piss off everyone in unpredictable ways. And as they do damage control, somewhere in England Alan Moore is laughing.

Go ahead and go worry about all that stuff then. It doesn't really have anything to do with or affect this subject whatsoever, it's possible for a person to cry in despair about the woes of the world and also have an opinion about comic books at the same time, amazingly.

DC show themselves to be a swath of bumbling twats every week it seems.

It is more than possible to be upset-- and do something about those issues while also telling DC that it's not okay to sexualize suicide during suicide prevention week.

I mean, rising college tuition costs are pretty bad -- but so are rising rates of suicide. In fact, one of those things kills people and the other doesn't.

Please don't tell people where to place their outrage, or what is worthy of outrage. Humans are complex creatures with the ability to care about more than one thing at a time.

Men telling me it isn't okay to be offended by the over-sexualized objectification of women and the glamorization of a suicide.

It's not just men saying such things, Avery.  You're such a sexist!

But seriously, there's room to be disgusted at both this and the things Anthony listed.  Just because there are worse things in the world doesn't make this acceptable.

But seriously, there's room to be disgusted at both this and the things Anthony listed.  Just because there are worse things in the world doesn't make this acceptable.

Go ahead and go worry about all that stuff then. It doesn't really have anything to do with or affect this subject whatsoever, it's possible for a person to cry in despair about the woes of the world and also have an opinion about comic books at the same time, amazingly.

It is more than possible to be upset-- and do something about those issues while also telling DC that it's not okay to sexualize suicide during suicide prevention week.

I mean, rising college tuition costs are pretty bad -- but so are rising rates of suicide. In fact, one of those things kills people and the other doesn't.

Please don't tell people where to place their outrage, or what is worthy of outrage. Humans are complex creatures with the ability to care about more than one thing at a time.

Exactly. Besides, it's hard to look at it as "just a comic book" if someone close to you has committed suicide. So, besides the obvious logical fallacy, you have obvious insensitivity. "Oh, people get offended at such trivial things. Who cares about suicide when I have to pay more for college?"

Let's break this down: A major publisher made light of suicide at the same time the rest of the world is trying to prevent it. That's a bad taste almost on par with having a gun rally after a school shooting.

So, 1) the existence of other problems does not negate this problem, 2) just because it involved a fictional character doesn't mean it's not a real problem, and 3) try not to act surprised when a writers' website reports stories concerning writing.

People get pissy about everything, especially activist groups. I get it, trust me... I'm a vegan and animal rights activist. But just because you have a naked woman or a suicide in your story does not imply sexualization or glamorization, just as an image in a work of fiction that depicts an animal being mutilated is not an endorsement of that behavior. Only if the work makes it an endorsement or actually glamorizes something can you make that call. I haven't seen this particular image so I'm not saying it is or isn't anything, only that a knee-jerk reaction is incorrect. That judgment should only come after seeing the image—and more importantly, it's eventual use and placement in the larger work—if it really does indicate sexualization or glamorization in the context of the work. This is fiction. We aren't disallowed from creating something just because somebody else doesn't like it. And yes, if you know someone who committed suicide it may seem to you in poor taste, but so what? You might also consider it in poor taste to see smoking in a piece if someone you know died of lung cancer, or hate seeing recreational drug use when someone you loved abused drugs. Life is full of unpleasantness. Again: so what?

Now obviously it was a bit weird to use it for a contest, but can you really say it's wrong? Or that it somehow encourages people to go kill themselves? Or makes suicide glamorous? Or makes fun of suicide? It was a dumb call and they should have expected the backlash, but that's as far as I care to judge it.

Michael - I highly suggest you check out the helpfully named website Has DC Comics Done Something Stupid Today before you continue with your line of thinking.

It will help you understand what the big deal is and why DC is losing fans left and right.  The issue is bigger than just this one story, it is just the latest.  And in context I think you'll understand that the reaction you've seen is not incorrect.

I read the call to artists on DC's own page. The official statement from them to artists. I think I have a *pretty* good idea of what I'm upset about, but thanks for letting me know what I should or should not judge.

In case you guys are interested, I had a conversation with Jim Lee about this very thing. He ultimately responded with this the next day.

I guess what I don't get is why anyone is latching on to this instance, and not others, to which I can only conclude that it's somehow personal to the respective person. Because a remarkably similar thing happened a few months ago, but nobody gave a shit, I'll go as far as saying nobody knew. At least not that I can find. I noticed, but only because it had a personal effect on me.

Having said that, I don't see, then, that DC is the bad guy, or any of it's representatives/spokespersons. It seems that it's what people are putting into this themselves that makes it offensive. Just like the other that perturbed me, it was because I let it, because of what I brought into it.

So if anyone is still reading this five days later, I pose the question, Is there any reason, other than personal, that this is wrong or in bad taste, etc.? What are they? Can anyone objectively discuss the issue?

PM me or comment below, I care to understand this.