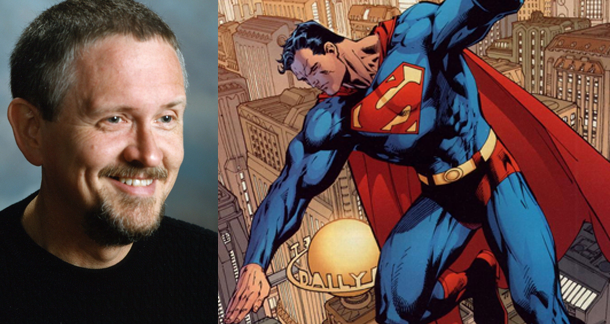 Comic book fans and a number of shops have made the decision to boycott DC Comics, particularly certain issues of The Adventures of Superman, after the company hired outspoken anti-gay writer Orson Scott Card to write part of the storyline. They’ve even collected over 11,000 signatures on a petition asking for him “to be given the boot”.

Whatever… comic book store in San Francisco and Zeus Comics in Dallas have already announced they won’t be carrying the editions of the comic with Card’s storyline. Zeus' owner Richard Neal wrote on Facebook

Card sits on the board of the National Organization of Marriage which fights against marriage equality. His essays advocate the destruction of my relationship, that I am born of rape or abuse and that I am equated with pedophilia. These themes appear in his fiction as well. It is shocking DC Comics would hire him to write Superman, a character whose ideals represent all of us. If you replaced the word "homosexuals" in his essays with the words "women" or "Jews" he would not be hired. But I'm not sure why it's still okay to "have an opinion" about gays? This is about equality.

Card, author of books like Ender’s Game and a Mormon, has used his own books to espouse his ideas on same-sex marriage and written numerous articles about the subject. It is a little surprising he was chosen as there’s been a move in a lot of comics and related genres recently to out gay characters and support LGBT issues. DC released this statement on the Advocate:

As content creators we steadfastly support freedom of expression, however the personal views of individuals associated with DC Comics are just that — personal views — and not those of the company itself.

Yeah, I understand having those freedoms means some people will say things I don’t necessarily agree with and I support this freedom. I just doubt this argument is going away any time soon. I’m curious: should Card be left alone to write his comic or should he be hounded back to whence he came?

While I'm personally disgusted by any outspoken homophobe, I feel it would be hypocritical to say that he shouldn't be allowed to write because of his views, as long as those views are COMPLETELY SEPARATE from his work. If DC goes in the way of LGBT equality, then Card should not be given the opportunity to set that back. The moment anything encouraging bigotry makes it's way into the comics is the moment he should be shut down, but not before then.

If OSC were an outspoken racist or anti-semite or misogynist would DC still extend the same offer to him?

I signed the petition.

Neil Davidson is reading Invitation to a Beheading by Vladimir Nabokov February 15, 2013 - 4:37pm

I can understand the idea of protesting Card's work because of a disapproval of his views, but to certain extent he is allowed those views just the same as people are allowed the freedom to organize a boycott of anything he is associated with.

Michael raised an interesting question, but i think that gay rights is becoming increasingly stronger in alot of ways. We see that here. I believe if the tables were turned and he was being criticized for being pro-gay rights we'd be on the other side right? So, why only when it goes against what we believe would we attempt to oust him?

Seems lopsided, therefore, i believe his views and work should be seperate. It is odd that they arent boycotting the works of the Dalai Lama as well.

If OSC is creating a bad work environment or writing in anti-gay stories into the comics, etc, that shouldnt be happening. Also, lets not kid ourselves comics are full of sexist, racist, material, as well as stereotypes.

Frank, I'm not quite following. Just curious. Gay rights is becoming increasingly stronger, as you put it, but wouldn't you say that the rights for racial and religious minorities, and women, are equally strong or most likely, stronger?

Are you saying that the notion of gay rights still isn't strong enough yet to make such a distinction as I describe, and therefore it's more okay for him to write for the comic than someone who is racist?

Personally, I don't see being pro gay rights, and having the same debate, as a valid flip of the coin—or are we having discussions about pro black, Jewish and female writers that I don't know about?

I'm curious about your reference to the Dalai Lama as well. I'm not an expert on the Buddha, but my rather shallow understanding is that the Dalai Lama is, for a spiritual leader, much more tolerant of diverse views. Hmm....

1. No gay rights arent as strong as the rights of those u mention in yer first question, as they are still struggling for equal rights.
2. I'll say that the fact that he was hired despite his outspoken beliefs leads one to believe that being on the anti side of gay-rights is not as "politically volatile" as other civil rights issues.
3. The "flip of the coin" was just me looking at it from another angle. Ultimately the issue is just as valid as other civil rights movements. However, if we say OSC must go, we must also be as pragmatic when it comes to other writers no?  Why is dave sims misogyny ok to have around in volumes of cerebus, the content of which has been criticized as misogynous, but not ok to have OSC stories (content politically/socially ok) ? Well because he's a homophobe! Were he a mysogonist or if his stories were mysogonistic itd be ok. Part of this issue is the fact that its one of the big two comic   Publishers, mind you. This is what is fascinating about society, the looking-glass logic that is used sometimes.

To be clear im not anti gay-rights, im just trying to understand the thought process behind this.

3.5 Buddhists apparently see gay/lesbian sex as misconduct, but believe they should have fair/equal treatment. I wiki'd it and theres a cited reference.

I suppose my point is if u do this to OSC you should be fair/equal and boycott others who are anti gay-rights.

Frank, thanks for responding. I didn't think you were against gay rights from your post. I just wasn't following the logic.

I think one of the distinctions I make is that OSC is flagrantly homophobic outside of his art. I think you're saying this as well. He's inserted himself in the political dialogue. And he's famous, relatively speaking. His fame is what got him the opportunity to write for DC. Misogyny and racism and all that stuff is fine within the art itself, whether you're a writer or painter or actor or whatever. But when you out yourself as a bigot of any kind, outside the art, then you open yourself to this kind of criticism, which I'm happy to see.

For me, this isn't really about OSC. It's about DC Comics, which seems to think that gay rights issues don't carry the same weight as other kinds of rights issues. For example, if OSC had stated he doesn't believe minorities should have the vote, or that interracial marriage is morally acceptable, then I have a strong hunch DC would consider him too controversial to write for their comics. Why not gay rights? It's a form of passive homophobia that needs to disappear, along with the rest of it.

Re: the Dalai Lama, I find it so refreshing, so enlightened, that a spiritual leader can distinguish between his or her own spiritual morality and the right for others to follow a different spiritual path. Would that all religious dogmas could be proselytized with such grace.

At any rate, ultimately this about DC and not OSC, and the behavior of DC is the reason I signed the petition. At any rate, I appreciate your thoughts on the matter. Good dialogue.

Dwayne from Cincinnati, Ohio (suburbs) is reading books that rotate to often to keep this updated February 16, 2013 - 9:36am

I protests like this petition gives press to people you don't like. I probably won't run out and buy this comic because Sups is boring like a sleep ray, but the comic wouldn't even have crossed my mind without out this article, and without the petition there would be no article.

edsikov from New York by way of Natrona Hts PA is reading absolutely nothing February 19, 2013 - 1:54pm

I signed the petition as well. Of course the schmuck has the legal right to write what he wants. That right doesn't oblige anyone to hire him. When DC starts hiring neo-Nazis and members of the KKK, then we'll talk about gay rights having come of age.