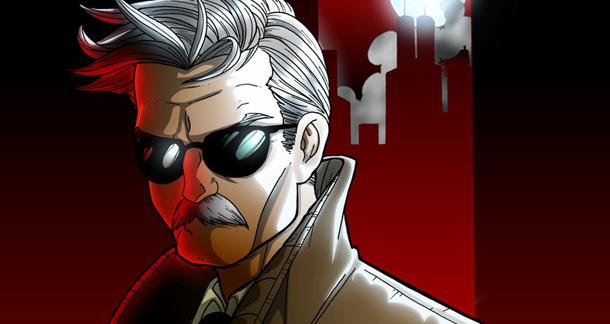 Deadline reports that Fox has won a drawn-out bidding war to produce Gotham, a TV series created by Bruno Heller (The Mentalist) that will explore Commissioner James Gordon's origins. The character will not be Commissioner in the series (at least not right away), as the show will basically be Commissioner Gordon Begins. Here's more from Deadline's Nellie Andreeva:

[The series] explores the origin stories of Commissioner James Gordon and the villains who made Gotham City famous. In Gotham, Gordon is still a detective with the Gotham City Police Department and has yet to meet Batman, who will not be part of the series.

Many have criticized DC for attempting to copy Marvel's successful presence in movies and TV, and as Screen Crush reports, the company's decision to announce Gotham mere minutes after Agents of S.H.I.E.L.D premiered seems like yet another copy-cat move. While it is apparent that DC wants a Justice League movie, and they no doubt want it to be as successful as The Avengers, I must remind critics that DC has already enjoyed a hit TV show with Smallville, and also made a sadly unsuccessful attempt with Birds of Prey. While I definitely have had problems with the company of late (just Google "DC controversy," if you haven't been keeping up), I don't knock them for wanting to be like Marvel. Hell, I want to be like Marvel. Doesn't everyone?

Personally, I think this series sounds pretty cool. If Gordon's a detective, we may get a kind of police procedural narrative, and because of the popular "gritty" style now prevalent with anything Batman related, we'll hopefully see some awesome incarnations of famous Bat-villains (like Black Mask, please). What do you think?

Dino Parenti from Los Angeles is reading Everything He Gets His Hands On September 26, 2013 - 10:56am

DC can separate themselves from the pack by making an actual good show--dark and gritty like the Dark Knight. I was less than impressed by the premiere of Agents of S.H.I.E.L.D.. I'm gonna give it a couple of more weeks, but I've already got one foot out the door with the tone. The Gordon show has a lot of dramatic opportunity just in showing how a fundamentally decent man deals with a hell-hole of a city and sadistic crime element.

Fox and DC working on a show together does not fill me with hope... I agree that Agents of SHIELD was not to my taste, but the network that thought broadcasting Firefly out of order was a good idea doesn't exactly fill me with confidence.

My fingers, however, remain crossed.