David Gilmour: "What I Teach is Guys" 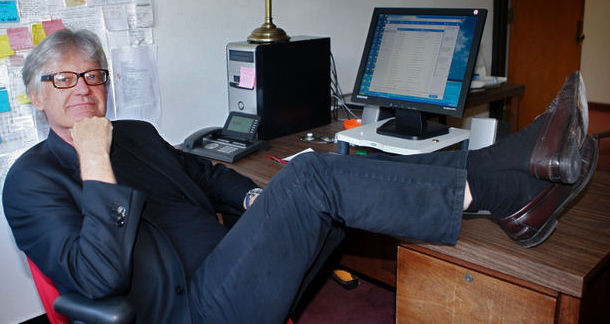 University professors don’t normally cause a lot of offense, it’s true, so it came as a bit of a surprise to David Gilmour — no, not the Pink Floyd guitarist, but writer, film critic and Professor of Literature at the University of Toronto — when remarks he made in an interview with Random House’s online magazine, Hazlitt, sparked a bit of controversy.

I’m not interested in teaching books by women. Virginia Woolf is the only writer that interests me as a woman writer, so I do teach one of her short stories. But once again, when I was given this job I said I would only teach the people that I truly, truly love. Unfortunately, none of those happen to be Chinese, or women. Except for Virginia Woolf. And when I tried to teach Virginia Woolf, she’s too sophisticated, even for a third-year class. Usually at the beginning of the semester a hand shoots up and someone asks why there aren’t any women writers in the course. I say I don’t love women writers enough to teach them, if you want women writers go down the hall.

Where’s Hemingway on that list, then? The outrage at his comments has spread like the proverbial wildfire; there’s nothing these interwebs like more than a bit of controversy. And the comments are very pointed. Interestingly, a lot of commentators are wondering about his choice of “serious heterosexual guys”, but then, I suppose that’s a matter of opinion.

Within a matter of hours, he issued an apology for the comments and seemed shocked at the reaction.

"I’m absolutely surprised, but I’m also extremely sorry to hear that there are people who are really offended by it," he told the Post… Gilmour said his talk with Keeler wasn't a formal sit-down interview, more of a chat with "tossed-off remarks." Comments about women, Chinese and other writers were meant as jokes. He said he's emailed his critics and apologized. "I'm not a politician, I'm a writer," he said. "We throw out tens of thousands of words every day. We usually rewrite them. In this particular chance, I didn’t get a chance to re-speak the sentence before it was printed.”

But will it boost his book sales? From the comments I’m reading, probably not. Was it a stunt? I think that less likely as he seems genuinely surprised that his comments have offended people. Does that excuse him? Well, I suppose we’re all human, the trick is to not get caught saying things like this.

Instag8r from Residing in Parker, CO but originally from WV is reading Blood Meridian by Cormac McCarthy September 26, 2013 - 8:48am

"Does that excuse him?" Are you kidding me? Why the hell does he need to be excused? He teaches what he reads, what he loves, and what he understands. he's honest about it. And he's right, if you don't like it, go down the hall. This Politically Correct bullshit has gotten way out of hand. If it offends you too bad, pull your big seriously heterosexual panties up and be a man, or woman, you're supposed to be an adult. I'm disappointed he apologized.

Joshua Chaplinsky from New York is reading a lot more during the quarantine September 26, 2013 - 9:18am

I agree, the PC media is on a witch hunt for people who say stupid shit, and we (the royal we) love to get all up in arms. But if you're in a position where you're putting yourself out there, if you're gonna play the game, you've GOT to be careful about what you say. Like it or not, that's the way it is. Gilmour could have chosen his words better. A statement like that is begging for backlash.

It's not just that he's put himself out there, it is that he is speaking as a teacher. He likely has students and former that admire him and take what he says about literature very seriously, and so his words have weight. Further "I'm not a politician, I'm a writer" is a really funny excuse... as a writer does he not understand the power of words?

Further, the reason a woman saying she teaches lesbian women authors wouldn't be treated in the same way because she would likely be teaching a course on "Queer Lit" or something similar. The point here is that he said he does it on purpose, he's removed the thion veil of plausible deniability when we talk about why women/LBGT/etc authors aren't getting the same attention in academia as male authors. You shouldn't need a special class just for women authors, and yet, it's the world we live in. And to say "he teaches what he enjoys and understands" is almsot worse... he can't possible enjoy or understand a book written by a woman? No woman? That's a really sad statement coming from someone who presumably enjoys fiction. Fiction isn't supposed to be stories about people just like the reader, otherwise, what's the point?

He's right though. The only really good female writers are more recent. I never liked the more "classic" ones they teach in college except for Sylvia Plath and they don't really teach her in college. And why does everyone have to apologize all the time? Stop apologizing.

In all the outrage most people just gloss over the fact that he says Woolf is too sophisticated for even a third year class. A high compliment in academic circles. This guy should be smart enough, however, to understand that the world only wants "individuals" who conform to the rest of the "individuals."

I'm offended by the offense in this artice that I totally didn't just skim! The nerve!

Non-troversy of the highest order. They guy teaches what he likes, loves, and understands. It just happens to be from a certain trough. I'm having a hard time getting up in arms about this one. He's not saying women writers are bad. What quells the outrage here, forcing the guy to teach things he doesn't like or have interest in?

I also hate political correctness, especially when it's faulting men for having perfectly reasonable sexist and racist viewpoints regarding literature. He's not breaking any laws, right? So, what's wrong with him influencing classrooms of impressionable literature students with the idea that straight white men can and should only be able to appreciate literature written by people in your specific groups? And really, you jackals already forced this poor martyr to deliver a very thoughtful flippant non-apology about how he was misinterpreted. How dare you try to blame this poor man! You people should be ashamed of yourselves!

Personally, I don't think he needed to apologize. He explained that he only teaches works by men because that is what he loves. There's absolutely nothing wrong with that. If I were a literary professor, I wouldn't have Russian Literature on my syllabus. He's the person who writes the lesson plan. If the governers and dean of the school don't like the plan, they can deny it and require him to write another one. People are essentially offended because he doesn't like women or Chinese writers. If he had said they weren't good writers, then I could understand some mild gasps, but it's one man's opinion. He even admited that Virginia Woolf is too complex for his courses.
So, get over it. Big deal, move on. There are more important things to worry about. Like books being banned.

He should be teaching his own workshop or something. Not a university level literary class. And not because of political correctness or what he believes or even that he said it. He shouldn't apologize for how he feels, what he likes. That's makes him a lesser man than the writers he's talking about. He should have just said, 'eh fuck off.' But I think his students are getting short changed. Their getting half a class for the money. Their paying for his opinion, a stupid one at that. Even though there are probably plenty of women teachers/professors only interested in women writers as well, an instructor should be well rounded and open minded. I think all his students should all, "go down the hall." Not because he's a sexist idiot, but because he's a pussy too.

@Instag8r If I was attending a course on modern short fiction and the professor taught only Chinese writers I might have something to say about that.

The reaction to Gilmour's remarks isn't (or shouldn't) be about his neglect of women writers, it's that he's drawing his material from way too small a pond. He's a teacher. This isn't about what he likes or doesn't like. It's about giving his students the best lessons he can.

Also, I have more books than him. I am applying for his job immediately.

While people are free to like what they like, the problem is that he is a university professor and his lack of inclusion of female writers or writers of color presents an extremely limited world-view to his students. Who says female writers, people of color, or LGBT writers can't also be serious? Instead of saying "I only like these dead white guys so that is what I teach," he should still be looking for people outside of his miniature universe to include in his list.

I tout the benefits of going to university for many reasons, few of which have to do with getting a job. One of the biggest reasons is to expand your realm of knowledge and surround yourself with people who aren't like you. This professor isn't expanding anyone's mind or challenging his students in anyway by only sharing same hetero white men who have been part of the cannon for a hundred years that they have been forced to read since high school.