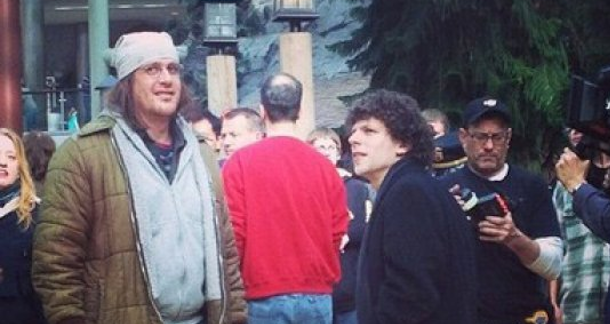 When the first images of How I Met Your Mother star Jason Segel as David Foster Wallace in the film The End of The Tour hit the web, as we reported in March, the reactions were less than kind, with fans of Wallace afraid that Segel's typically goofiness would not do justice to the author.

Wallace's fans may have been upset by Segel's portrayal, but the late author's family and his publisher are now upset about Wallace being portrayed on film at all, saying the book the film is based on, David Lipsky's Although Of Course You End Up Becoming Yourself, should never have been made into a film. In fact, Wallace's family is upset that Lipsky (who is being portrayed by Jesse Eisenberg in the film) published the book at all, according to a new statement as reported by the Los Angeles Times.

The book was based on transcripts that Lipsky captured in interviews with Wallace for an eventual magazine article about the author's magnum opus, Infinite Jest, an article that was never actually released. The family's statement details that the transcripts were never intended to be a book, and that the further use of the book as the basis of a film is offensive to the author's legacy.

The David Foster Wallace Literary Trust, David's family, and David's longtime publisher Little, Brown and Company wish to make it clear that they have no connection with, and neither endorse nor support The End of the Tour. This motion picture is loosely based on transcripts from an interview David consented to eighteen years ago for a magazine article about the publication of his novel, Infinite Jest. That article was never published and David would never have agreed that those saved transcripts could later be repurposed as the basis of a movie. The Trust was given no advance notice that this production was underway and, in fact, first heard of it when it was publicly announced. For the avoidance of doubt, there is no circumstance under which the David Foster Wallace Literary Trust would have consented to the adaptation of this interview into a motion picture, and we do not consider it an homage.

The individuals and companies involved with the production were made keenly aware of the substantive reasons for the Trust’s and family’s objections to this project, yet persisted in capitalizing upon a situation that leaves those closest to David unable to prevent the production. The Trust will continue to review its legal options with respect to any commercial exploitation of the motion picture.

Most importantly, The David Foster Wallace Literary Trust and David's family prefer that David be remembered for his extraordinary writing. The Trust remains open to working with a range of artists who are interested in respectful adaptations, and will vigilantly protect David’s literary and personal legacy.

The End of The Tour, in all its unauthorized glory, doesn't have a release date as of yet, but when it does come out, don't expect Wallace's family to be in attendance.

Wasn't it Seigal that publicly said his actual humor was not as wholesome as it wasportrayed in the sitcom? I guess will see if that's true.

I'm not a big fan of biopics, but I have enjoyed Mr. Foster's work. It seems that a good portrayal of his life would have something to do with his brilliance and his struggle with depression. I'd like to see the film makers deal with the question that in spite of his tremendous talent, David Foster Wallace never wrote a really great book. Sure, Infinite Jest was long, and parts of it very good, but it falls far short of being a really great book. It's too bad we lost him when we did, that great book was still in him.

Tom, I agree, I think Infinite Jest had the content of what could have been 2 or 3 good books, but as a full product, it just dragged on so much that it was hard to stick with.

Sean, how far did you make it into Infinite Jest? I got as far as nine hundred pages and that was all I could take. I really enjoyed how he juxtaposed the tennis academy and the half-way house. I agree with you that something like that could have made a decent novel on its own. But Mr. Wallace had so much going on in the book it didn't come to gether as a story. My impression of David Foster Wallace is that he was a great writer, but not a great story teller. I hope his legacy will focus on the social observations he made.