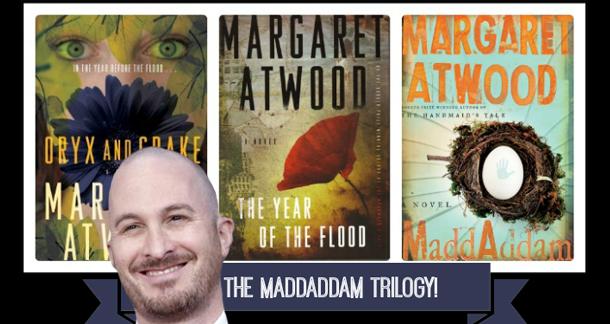 Looks like Darren Aronofsky will be telling another story about a flood—this time a waterless one.

It has been reported that the Noah helmer is developing an adaptation of Margaret Atwood's Maddaddam trilogy for the fine folks over at HBO. For those of you unfamiliar with the series, please allow me to quote myself:

The Maddaddam trilogy, which begins with 2003's Oryx and Crake, speculates about what society will become. In this case, it is in the wake of a near planet-wide catastrophe, which leaves Jimmy (aka Snowman) the last man on earth. He's not alone, however. He plays reluctant prophet to a genetically modified group of humanoids called the Crakers. The Crakers were bio-engineered by Jimmy's best friend, a timid genius called Crake (aka Glenn). Technically they were the property of the RejoovenEsense Corporation, where Crake was supposed to be working on the "problem" of mortality, but in reality they were his Adam and Eve, and he cast himself in the role of God. The story of Jimmy and Glenn is told through flashbacks as Jimmy navigates the harsh post-catastrophe life.

Aronofsky's Protozoa Pictures signed a first look deal with HBO back in January, and this is the first project under that deal. Details are still scarce, but Aronofsky will Executive Produce, and it is expected he will also direct (at least partially). Aronofsky's fiancee, Brandi-Ann Milbradt, who brought the project to Protozoa, will also Executive Produce, as will Protozoa President, Ari Handel. The trio are in the process of hiring writers, so it might be a while.

What do you think? Could this be the next Game of Thrones? One where we won't have to worry about the author kicking off and leaving us hanging? Or would you prefer Atwood's world left on the page, only to be visualized in your mind?