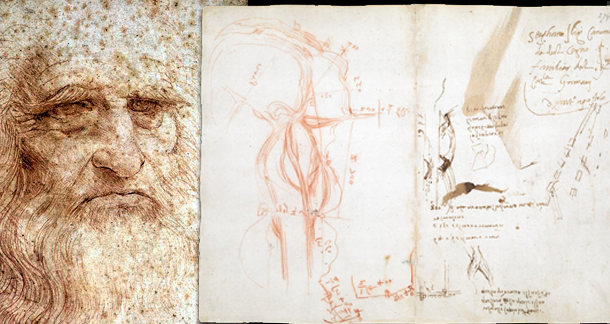 Leonardo da Vinci was ahead of his time in so many ways, and I’m not just talking about his drawings for flying machines and submersibles: he was an amazing thinker on a lot of subjects as well as an accomplished artist. But, considering he lived in the age after movable type had been invented and owned printed books, it's surprising he didn’t actually publish any of his own. We don’t know why, he just didn’t. What we have of his writings have survived in the notebooks he left to his student, Francesco Melzi, which were eventually sold to wealthy collectors, most of which have remained in Europe.

They vary in size from large volumes to notebooks that would fit in the palm of your hand. The British Library owns one of these notebooks, known as Arundul MS 263, as it was probably brought to the UK by Thomas Howard, 2nd Earl of Arundel in the 17th Century, whose great-great-grandson presented it to the Royal Society. The Library has just published the complete document online.

The notebook appears to be a compilation of his papers (as many of his ‘notebooks’ are), written using his ‘left-hand mirror-writing’ technique and described by Leonardo as “a collection without order, drawn from many papers, which I have copied here, hoping to arrange them later each in its place according to the subjects of which they treat”.

It covers many years of Leonardo's life and the astonishing range of his mind as he moves from problems of mechanics to shopping lists. These really are working notes, not a manuscript being readied for publication, and Leonardo has no hesitation in adding a personal reminder or practical memo right in the middle of a sheet of mathematical studies.

Having had a slight obsession with the artist’s life and works, this is a fascinating object and one likely to appeal to many people, even just to browse through as “You don't need a translation to appreciate the beauty and wonder of Leonardo's mind”. Here’s hoping it sparks a trend and we get more works like this online — and not just by Leonardo!

You can see the notebook in its entirety on the British Library website.

I for one am absolutely fascinated with Leonardo, this is an awesome development.

Neil Davidson is reading Invitation to a Beheading by Vladimir Nabokov February 15, 2013 - 3:46pm

This is fantastic. I'll have to look for this online.