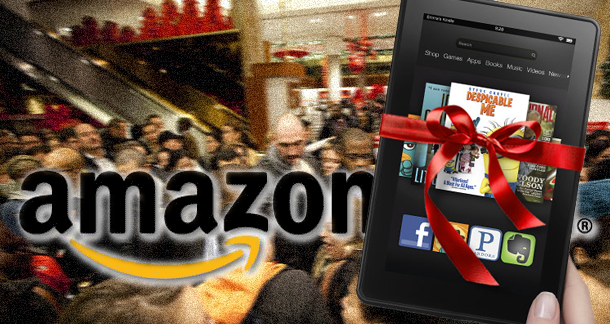 New records seem to be the order of the day - and Amazon’s just set another one: on Monday they sold more Kindles in a day than they ever have before. That’s worldwide.

Okay, it probably helped that to celebrate the Monday after Black Friday, now dubbed “Cyber Monday”, they offered the Kindle Fire for just $129. That was obviously a bargain too good to pass up. And you didn’t have to elbow anyone out of the way or get pepper-sprayed to get one.

'Kindle eReaders and Kindle Fires have held the top 4 spots on the Amazon worldwide best sellers list since launch, and that was before the busiest shopping weekend of the year,' said Dave Limp, Vice President, Amazon Kindle. 'We’re excited that customers made this Black Friday and Cyber Monday the best ever for Kindle worldwide—Cyber Monday was the biggest day ever for Kindle sales, and we’re looking forward to millions of customers opening a new Kindle this holiday season.'

It doesn’t stop there: apparently the Kindle Fire HD is the “most gifted and wished for product on Amazon worldwide since launch.”

Are you getting someone a Kindle for Christmas? Hoping to get one? Or would you rather be beaten about the head with a two-by-four?