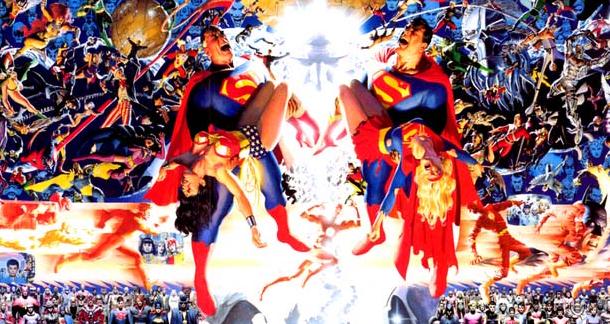 After a report from Warner Bros. hit the internet about a week ago, a picture of four years' of comic book movies has taken shape.

Here's a list of confirmed projects with the added bonus of a reason for each.

May 1, 2015 – Avengers: Age of Ultron – Marvel Studios
Because you were beginning to tire of watching GIFs of the Hulk smash Loki into the floor over and over.

June 9, 2015 – Fantastic Four – 20th Century Fox
Because the FF deserve a second shot. In fact, a third shot if you consider the Roger Corman version.

July 17, 2015 – Ant-Man – Marvel Studios
Because Paul Rudd as Ant-Man. Things could get interesting.

May 6, 2016 – Batman V. Superman: Dawn Of Justice – Warner Bros.
Because Ben Affleck might have earned a second shot at superhero status by now.

May 6, 2016 – Captain America 3 – Marvel Studios
Because Marvel films seem to fall apart in the third installment, this one has something to prove.

June 10, 2016 – The Amazing Spider-Man 3 - Sony
Because the villains keep lining up. Will we get Kraven the Hunter? Carnage? Stilt Man?

July 8, 2016 – Untitled Movie – Marvel Studios
Because the sequels keep coming, but it could be a new project. Rumored projects include Black Panther, Doctor Strange, and the Inhumans.

July 2016 – Shazam – Warner Bros.
Because the relationship between this movie and Dwayne "The Rock" Johnson is the only on again/off again relationship worth caring about.

March 3, 2017 – The Wolverine 2 – 20th Century Fox
Because we won't know the saturation point of Wolverine until long after it's been reached. By the way, this film is not to be confused with Wolverine: Origins. Or X-Men 2. Or X-Men: Days of Future Past. Remember, it's THE Wolverine 2.

May 2017 – Justice League – Warner Bros.
Because DC comics has yet to answer Marvel's The Avengers.

May 5, 2017 – Untitled Movie – Marvel Studios
Because it's more fun, let's ponder the possibility of a Howard the Duck redux. The hero the world deserves, AND the one it needs.

December 2017 – Flash & Green Lantern Team-up – Warner Bros.
Because The Flash never gets made, and because Green Lantern had its issues, why not combine those problems?

May 2018 – Man Of Steel 2 – Warner Bros.
Because although it's long after the first installment, we can all expect Superman to make appearances in Justice League and the Batman/Superman movie.

July 13, 2018 – Untitled Movie – 20th Century Fox
Because there are only so many hilarious projects you can speculate on, let's assume this one will be another sequel.

No Date Announced – Venom – Sony
Because we might just get a villain-focused film.

No Date Announced – Sinister Six – Sony
Because Doctor Octopus, Sandman, Mysterio, Vulture, Elector, and Kraven the Hunter seem like a group of dudes who would work well together.

More like a Noah's flood over Avenger movies. First it was water, then it was fire. And now ... super hero films.

Joshua Chaplinsky from New York is reading a lot more during the quarantine June 16, 2014 - 5:09pm

I have yet to see a good superhero movie.

Joshua Chaplinsky from New York is reading a lot more during the quarantine June 16, 2014 - 5:11pm

Batman has only been portrayed so-so. His vllians have received either excellent treatment, as in the case of the Joker, Bane, and Scarecrow, in the Nolan films; and Catwoman in Burton's film.

Apocalypse is one I look forward to the most, but with the most anxiety too, because he is my absolute favorite villain, and there was an excellent origin story of him in the comics, called "Rise of Apocalypse" that showed him as an Egyptian-born 'mutant.' The animated series handled him best, beyond some of the comics. And the fact that he has used Mystique for his purposes works so well with the growing emphasis in the films of how great and useful a character such as Mystique can be.

Batman and Robin is the only super hero movie worth watching.

There was a Generation X movie on Fox many years back when the comic was still around (maybe it's still around?). It was greatness.

The Sandman is the only movie on there that shouldn't really be called a comic book movie.

The rest is just meh.