Crime Writers Compete To Have Morgue Named After Them 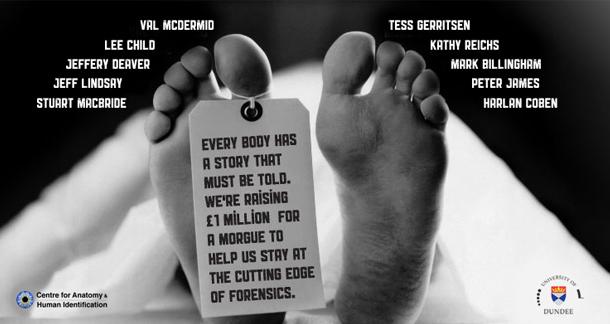 Ten of the world's top crime writers are competing for what is probably the most genre-appropriate honor ever: The right to have a morgue named after them.

Scotland's University of Dundee is trying to raise £1 million (about $1.6 million) for a new morgue and research facility, and came up with the Million for a Morgue campaign to fund it.

So here's how it works. Go to the website. Vote for your favorite author among these ten:

Voting will cost you £1 ($1.60). You can vote as many times as you like. If you decide that you really love Lee Child and want to donate £20, then he'll get 20 votes. And that's it. Whichever author gets the most votes gets the morgue named after them. They also earn my undying jealousy.

So far, the website says Tess Gerritsen is way in the lead.

The idea came together from a friendship between Val McDermid and University of Dundee Professor Sue Black. Black has helped McDermid with forensic research for his stories, and they've appeared together at book festivals to discuss crime fiction.

Apparently the rest of these authors feel like they owe a big debt to the forensic community, too. Jeff Lindsay, the creator of everyone's favorite Showtime serial killer, Dexter Morgan, called it an "opportunity to make a small down payment on the huge debt I owe the forensics community."

The new center will allow the University of Dundee to utilize the Thiel embalming method, which is superior to normal techniques:

The cadaver is more lifelike with retained colour and flexibility offering tremendously exciting opportunities for surgical, medical, dental and scientific study and research... The cadavers require to be submersed in the Thiel fluid for up to two months and therefore special tanks for preparation and storing need to be built as well as racking for longer term storage as remains can be retained for up to three years.