Cops Drop The Hammer On Makeshift People's Library In Oakland 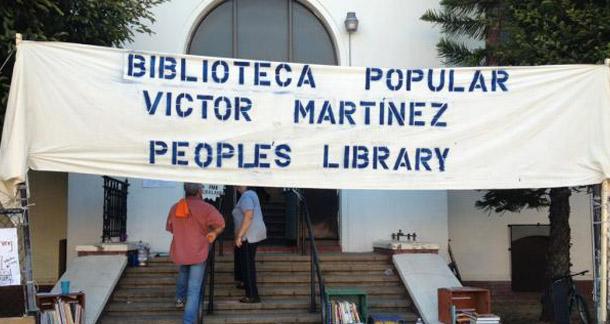 Activists recently took an abandoned building in Oakland's San Antonio neighborhood and transformed it into the Victor Martinez People's Library, in honor of the late Latino author. They cleared the graffiti and mattresses out of the building and offered books for rent on the sidewalk outside.

So of course the cops came in and shut them down. No arrests or injuries, but I guess it's better that the building continue to sit vacant, ignored, and maybe even end up host to illegal activity?

The building had been a city library until 1979, [Officer Johnna Watson, a police department spokeswoman] said. After the library closed, the building housed a continuation school and then a social services center. It was closed in 2010, Watson said. It is owned by the City of Oakland's Redevelopment Successor Agency within the Office of Neighborhood Investment.

The building once was an ornate space with built-in wooden bookshelves and high ceilings decorated with molding. Completed in 1918, it was one of four branches funded with a Carnegie grant. But Jaime Silva, one of the activist organizers, said the property had gone mostly unused since the library closure, attracting squatters and illegal dumping. For years, he said, it's been "a dark place that sucks the life out of the community."

Oakland City Councilmember Ignacio De La Fuente said the building was damaged in a 1989 earthquake and requires costly retrofitting, but activists say that residents should at least be permitted to turn the grounds into a community garden, to get some use out of it.

You can see photos of the library at this link.

What do you think? Now, granted, these people didn't own the property, but it's not like they were turning it into a crack den...

Dwayne from Cincinnati, Ohio (suburbs) is reading books that rotate to often to keep this updated August 17, 2012 - 7:01am

I think the real issue might be that there wasn't a for them to claim an abandoned property like this legally.

Where were the cops when the squatters were in the building?

My exact thoughts as well, Tom.

This is illustrative of why people don't do good things out of the kindness of their heart anymore, at least to the degree they used to. No good deed goes unpunished, and most bad deeds are often ignored.

The library people were squatters in the building. Much more obvious ones. They didn't have permission to use the property. They probably never knew the others were even there. I'm all for it being made into a library or the guy making it into a library, but there are definite issues with letting people take over city buildings, especially for a library with a very political slant.

I do see the issue here, but I also have to ask why the city hasn't done anything to maintain the property, either. Yes, the people who opened the library were more 'obvious squattters' but there is no way people in that area didn't know that there were squatters in it before.

The area I grew up in has a lot of very expensive foreclosed on houses...they sat empty and attracted squatters, vandals, theives stealing copper wiring and fixtures, etc. When the houses were rented out to college students, the remaining residents had a SHIT FIT. They felt it took away from the enivronment they had hoped to have when they bought their houses--ignoring the fact that empty houses are a magnet for crime and lower their property value.

Now, I don't know if the people in this neighborhood complained about the library or the city took it upon itself--but I do think it's important to remember that leaving an empty building hanging around is bad news. If they don't want squatters--they have to do something with the building.