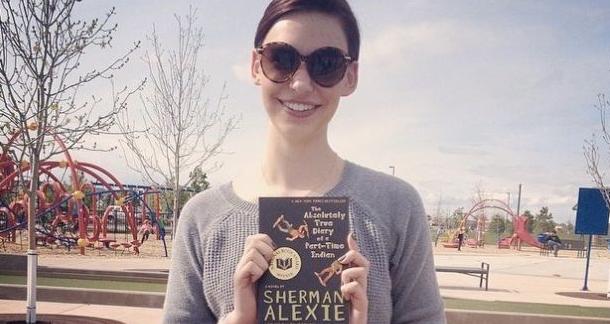 After a group of parents successfully removed Sherman Alexie's The Absolutely True Diary Of A Part-Time Indian from their local school district in Idaho, an attempt was made to stop distribution of the book outside schools as well.

Absolutely True Diary was taken off a Meridian, Idaho school district's 10th grade supplemental reading list after a group of concerned parents complained to the school board about the book's contents. The board voted to remove the title despite a 350-signature-strong student petition to keep it.

As a result of the ban, two residents of Washington state started a fundraiser to purchase 350 copies of the book, one for each student who signed the petition. These copies were purchased through the Meridian, Idaho bookstore Rediscovered Books and were handed out for free on World Book Night.

While the books were handed out at a local park, a concerned citizen called the police, someone "concerned about teenagers picking up a copy of the book without having a parent's permission."

The police arrived at the park, asked the event's organizer a few questions, and left without interrupting the event further. From local news: "[The police] said they found nothing wrong with what was going on in the park."

Following the success of World Book Night, where 315 of the 350 copies were distributed, Sherman Alexie's publisher has donated an additional 350 giveaway copies of The Absolutely True Diary Of A Part-Time Indian to Rediscovered Books.

Does removing a book from a curriculum work? Or does it just drive interest? Would The Absolutely True Diary Of A Part-Time Indian be as well-known as it is without being surrounded by controversy?

I'd love to write a banned book, thats just going to create publicity even more for the author. Seriously lets banned some great adult ooks as well/

someone will have to explain to me how a school taking a book out of its curriculum somehow equals giving away free copies in a park???

they're everywhere these days.

His book was a part of my college curriculum in Idaho, so it's interesting to read that it's been banned just a little lower in the Panhandle. Personally, I think banning a book gives it more power. Then again, no book should ever be banned. :)