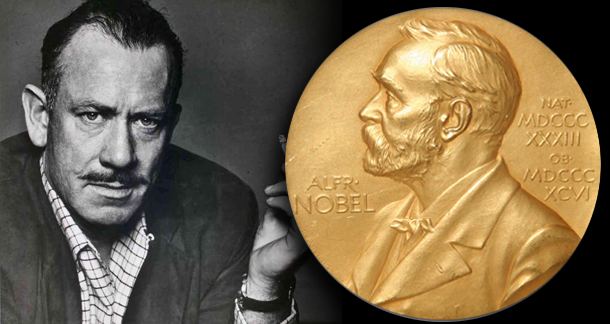 The Nobel Prize for Literature has seen its share of controversy, and records recently released from the Swedish Academy’s archives would suggest this isn’t a new state of affairs.

In 1962, American literary giant John Steinbeck was awarded the Nobel Prize in Literature, beating a shortlist of 66 authors including the likes of French dramatist Jean Anouilh, Danish author Karen Blixen, and British authors Robert Graves and Lawrence Durrell. But the choice was not an easy one, according to committee member Henry Olsson:

There aren't any obvious candidates for the Nobel prize and the prize committee is in an unenviable situation.

And as Steinbeck had been previously nominated 8 times, maybe they thought they’d throw him a bone for his 1961 novel The Winter of Our Discontent. The author appears to have been surprised by it, too. When asked if he deserved the Nobel, he replied: "Frankly, no."

Would it have been more honest to not award the Nobel that year? Did Steinbeck deserve it? I tend to take these prize thingies with a pinch of salt -- I rarely agree with the winners of literary awards these days…

what do you mean no Nobel Prize last year? You forgot Mo Yan?

Joshua Chaplinsky from New York is reading a lot more during the quarantine January 7, 2013 - 8:11am

Oops. That was the Pulitzer. Thanks.

April Victoria from California is reading Mortal Ties by Eileen Wilks January 7, 2013 - 8:23am

The more I read classics the more I come to respect and appreciate the way in which Steinbeck crafts his works. East of Eden is an oft overlooked gem.

One of the greatest American novelists of all times. But it seems that "deserves" got little to do with the Nobel Prize. Much of it is politics and PR. It's like arguing who deserves an Oscar -- too subjective for anyone to be right.