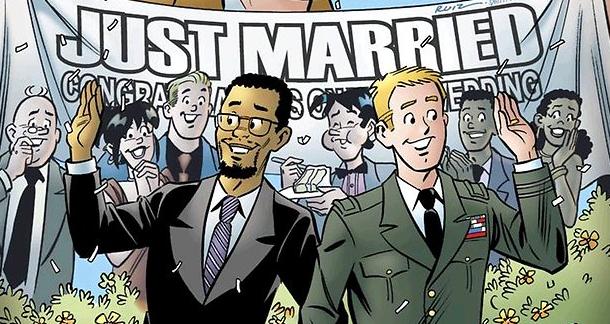 Conservative group One Million Moms is demanding that Toys 'R' Us stop selling an issue of Archie Comics that depicts a (gasp!) gay marriage.

Clearly, these are the end times.

In issue 16 of the Life with Archie series, the comic's first openly gay character gets married to his boyfriend. One Million Moms (an organization which, by a few accounts, has less than 40,000 members) drafted up a form letter parents can send to the store. Here's an excerpt:

Unfortunately, children are now being exposed to same-sex marriage in your toy store. This is the last place a parent would expect to be confronted with questions from their children on topics that are too complicated for them to understand. Issues of this nature are being introduced too early and too soon, which is becoming extremely common and unnecessary.

One Million Moms previously tried to boycott JC Penny for hiring Ellen DeGeneres, a known gay, as its spokeswoman. The retail giant stuck with Ellen, who addressed the controversy on her show (you should watch the video, it's brilliant).

For the record, One Million Moms is a ministry of the American Family Association, which was labeled as a hate group in November 2010 by the Southern Poverty Law Center, for its "propagation of known falsehoods and demonizing propaganda."

So what do you think, folks? Is this a topic that's too hot for Toys 'R' Us?

Or should everyone just calm down about gay marriage now that Archie Andrews, American pop culture's most wholesome character, has embraced it?

One Million Moms? More like Pack of Assholes. My daughter loves Archie comics. I can't wait to get her a copy of this one.

One Million Moms operates under an archaic back asswards mentality...and none of them are MILFs.

How is gay marriage too complicated for a child to understand?  Do these parents just tell there kids, "oh there is a gay couple, its a disease that you just can't comprehend right now."  Absurd, I don't have any empirical proof, but I'm pretty sure you can't catch the gay from reading a comic book.

Typewriter Demigod from London is reading "White Noise" by DeLilo, "Moby-Dick" by Hermann Mellivile and "Uylsses" by Joyce February 29, 2012 - 12:18pm

As long as no graphic fucking is shown, there shouldn't be a problem. Republicans are born to bitch and wail. They need to be ignored.

Taking it out of Archie comics won't take it out of reality. These people are ignorant idiots clinging to the hope that they can raise their children in ignorance as well.

"Mommy, instead of protesting and boycotting today will you please take me to a museum or a library?" http://wp.me/p1se8R-2uB

Isn't it much more confusing to explain a blended family that involves kids from several marriages and divorces than it is to explain "those men have been in love for years and want to be married"?

The kids really don't care.  These narrow-minded mothers are trying to raise their children Little House on the Prairie-style instead of living in reality.  It's really sad.

This whole thing is just ridiculous. This "One Million Moms" organization needs to just stop. They are clearly no longer in the line of protecting their children and have become an organization for bashing homosexuality. It's just insulting.

It's not like they made Archie gay.  It's a new character that they created. Although I always wondered about Archie and Jughead.