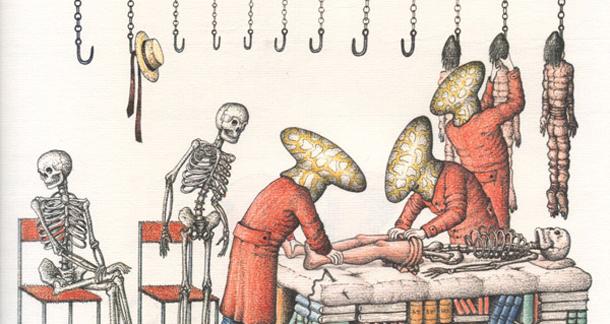 Fans of printed oddities (like myself) take note: Codex Seraphinianus, one of the strangest books in history, will soon see a slick reissue from publishers Rizzoli Italy, based in Rome. The Codex, as it's colloquially called, was written by Luigi Serafini and first published in 1981. I briefly touched upon the Codex earlier this year in a news article about the most sought-after and rare books of 2012, and I'm happy I have the chance to write a little more about it. I don't own a copy, but since learning about the book in January, I've been pining for one. I mean, just look at that header image; who wouldn't want a book with images like that gracing their shelves?

Here's a little more about the Codex from Wikipedia:

Codex Seraphinianus, originally published in 1981, is an illustrated encyclopedia of an imaginary world, created by the Italian artist, architect and industrial designer Luigi Serafini…The illustrations are often surreal parodies of things in the real world: bleeding fruit; a plant that grows into roughly the shape of a chair and is subsequently made into one; a lovemaking couple that metamorphoses into an alligator; etc. Others depict odd, apparently senseless machines, often with a delicate appearance, kept together by tiny filaments. There are also illustrations readily recognizable as maps or human faces. On the other hand, especially in the "physics" chapter, many images look almost completely abstract. Practically all figures are brightly coloured and rich in detail.

Furthermore, the text of Codex Seraphinianus is in a made-up language that has some kind of mathematical significance, being rooted in the number 21, so of course people have cooked up all kinds of "secret meanings" behind the grotesque and absurd book. Dangerous Minds published a love-letter to the Codex that details some of these "findings."

Also featured in the DM article is an interview with Rizzoli Italy chief publisher Charles Miers, who provided some tasty details on the new edition:

DM: I think I heard that there’s new content and even drawings in this edition that haven’t appeared previously. Is that true? What’s new about it?

CM: Yes that’s true, the first 2 chapters are made with completely new drawings, also new is the 22 pages “Decodex” insert in which the author explains in various languages when and how the Codex came to life and the crucial help he had in this from a white cat.

The new-and-improved Codex Seraphinianus hits book shelves on October 29th, and you can pre-order from Amazon now (follow the link below). While you wait, check out the below video featuring a symphony dedicated to the Codex, with accompanying images from the book (also taken from the Dangerous Minds article).

Who's going to get this book? The price is still pretty steep, but man, it seems worth it to me.

Special thanks to Cath Murphy for clueing me in to this one.

I am definitely getting this.

Joshua Chaplinsky from New York is reading a lot more during the quarantine October 10, 2013 - 1:39pm

Only a displinarian would buy this. To make misbehaving students read it.