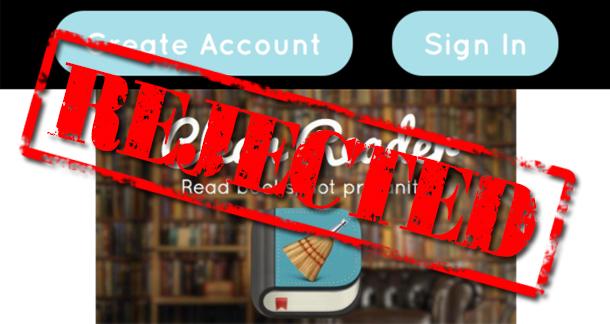 The creators of the Clean Reader app have bowed to pressure and announced that due to an overwhelming number of objections posed by authors, all books in its library are to be removed.

Those in the ‘Verse might recall that LitReactor posted an initial article upon release of the app.  Soon after the story went live on multiple media outlets, authors began to protest its purpose, reports The Guardian. Clean Reader scrubs books of words or phrases considered profane or inappropriate for readers, and in doing so brings into question the right to censor an author’s work.

Coining the catchphrase, “Read Books, Not Profanity,” Clean Reader replaced what it considered to be “inappropriate” terms with some interesting alternatives. “Fucking” became “freaking,” “hell” was switched out for “heck,” and “shit” turned into “crap.” Profanity wasn’t the only area to be scrubbed, as users of the app also found that even names for body parts, sexual terms, or references to deities were censored. “Penis” became groin,” “breast” was changed to “chest,” “blow job” to “pleasure,” “Jesus Christ” to “geez,” and (my personal favorite) “vagina” to “bottom.” One can only imagine how hard this would make reading erotica.

Among the list of authors speaking out against the app are Joanne Harris, Charlie Stross, Margaret Atwood, and Chuck Wendig. The latter two parties even took to Twitter to express their outrage, with Atwood tweeting, “Could you take the kettledrums out of Beethoven because you don’t like loud noises and still call it Beethoven?” Wendig, of course, employed his trademark humor in tweeting, “Personally I think #CleanReader is a bunch of HOT JEEPERS MCGEE and a bucket of MONKEY FLOPPING CUPCAKE BATTER oh gosh they got to Twitter.”

Clean Reader’s decision to stop selling books came after both Inktera and Smashwords founder Mark Coker pulled all titles from the library in a show of support for the authors, and due to legal implications the app imposed.

The controversy surrounding Clean Reader just goes to show that one should never mess with an author! What do you think of the app’s demise?

Couldn't have happened soon enough.  The concept is completely unacceptable.

June Faramore from Baltimore, Hon is reading Fear and Loathing on the Campaign Trail '72, The Destruction of the European Jews, Haunted, Damned, In Cold Blood, Infinite Jest March 30, 2015 - 11:40am

Ha, remind me not to use this one then.

And let's be clear for those few who do write erotica, if your writing "she whipped out his groin, and gave him ... pleasure" people pretty much know what you mean anyway. So I'm not sure of their motives behind censoring those specific words.