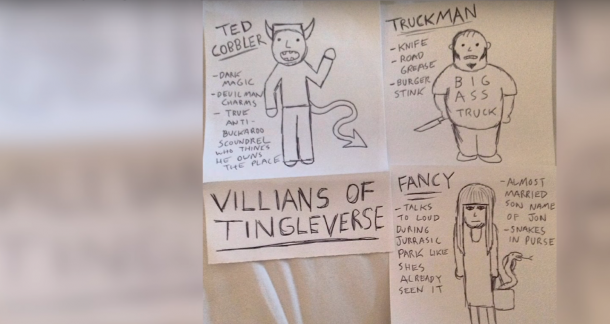 What do you get when you cross unicorns, Bigfoot, ripped dudes and romance?

The newest Chuck Tingle book, of course. Wait, no. The newest video game from game designer Zoe Quinn. Wait, no. It's both, actually. This time, we get both.

Zoe Quinn, best known for her work on Depression Quest, has announced that in the next two years she'll be releasing her newest project, a full-motion video dating simulator, inspired in part and with edits and suggestions by none other than Chuck Tingle.

I make weird stuff. Finding the worst, most ridiculous bullshit you can do at any point, that becomes the game. And then I want the game to react to it by getting worse and more ridiculous.

Quinn's definitely makes weird stuff. On her site, you can find games such as Waiting For Godot: The Game, Win R.L. Stine's Money, and one simply titled "Busey" with the tagline "I...can't even defend this one."

And she's in good company with Chuck Tingle, creator of works such as Helicopter Man Pounds Dinosaur Billionaire Ass and Slammed In The Butt By Domald Tromp's Attempt To Avoid Accusations Of Plagiarism By Removing All Facts Or Concrete Plans From His Republican National Convention Speech.

It sounds like a match made in heaven. The kind of heaven I'd like to end up in, anyway.

Find out more in the video below.

Chuck Tingle is the finest wordsmith that humanity has ever had the priviledge of birthing and embracing. Each and every word he uses sends a powerful message of hope, redemption, goodwill, and self actualization. To say that each book he has written is better than the last would imply that Chuck Tingle has ever written anything bad.

In short, Chuck Tingle is here to save us.

Joshua Chaplinsky from New York is reading a lot more during the quarantine August 26, 2016 - 8:39am

I WILL play this.

Thanks for the info

If you're looking for a date with a Japanese woman, there are some tips to consider. First, it's important to remember that the culture of Japan has allowed psychos to hide away, and you should be honest with yourself and avoid assuming everything you hear is true. You might think that japanese women are shy and reserved, but they are in fact direct and assertive once they know you. Luckily, these tips can help you navigate the relationship with a Japanese woman.

asian brides for marriage may seem elusive to many men, but they are not as difficult to find as you may think. You can browse through the different sections of the site and find a potential life partner who has the traits and qualities that you are looking for. Moreover, they are more likely to be honest about their needs than a white Western man, making them more likely to be willing to compromise their needs.