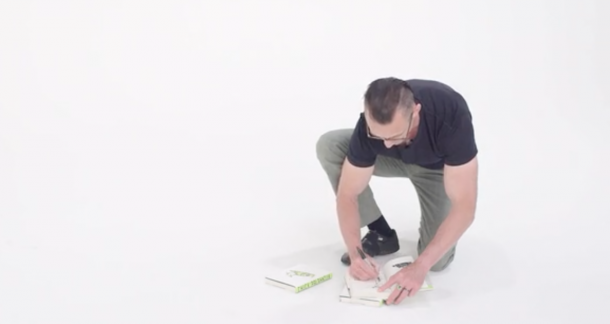 Chuck Palahniuk fans know the pain of movie adaptations come and gone. Tuesday we're hearing about a Survivor movie, Wednesday it's a James Franco version of Rant. And then, for the most part, these things don't materialize.

Today, a new Kickstarter project gives us reason to be hopeful.

Chuck Palahniuk himself is co-writing the screenplay for a Lullaby adaptation, and he'll serve as the movie's executive producer. Provided the movie makes its Kickstarter goal ($250,000), it looks like we'll finally see another movie adaptation of a Chuck Palahniuk book.

For those who haven't read Lullaby, the story follows a group of people seeking out copies of a children's book that reprinted a culling song, a poem that, when read out loud, kills anyone who hears it.

For those who have read the book but don't know much about its origins, Palahniuk revealed in the Kickstarter project video that the book is very personal, having a lot to do with the murder of Palahniuk's father in 1999 and Chuck's taking the stand during the trial.

Palahniuk, from the Kickstarter project video:

Lullaby is the book about dealing with whether or not I advocated the death penalty after [a] man was convicted of killing my father.

The film is set to be directed by Andy Mingo, who is currently directing some trailers for the Fight Club 2 comics and directed a short based on Palahniuk's short story "Romance."

It's not too late to donate and make this happen.

And I have done my part for the arts.

grabbed a screening in Austin, plus all the other cool perks that come with it. this is going to be great.