Children's Book Based on Gruesome Horror Anthology 'The ABCs of Death' Now Available! 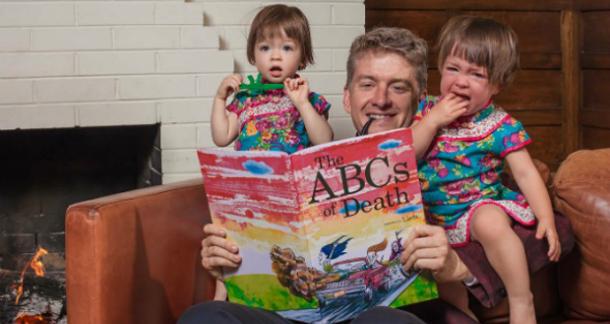 From the guys that brought you The ABCs of Death, a 2012 anthology horror film featuring a death for every letter of the alphabet, comes the next chapter in fear: a children's book based on the film.

That's right. Film producers Tim League and Ant Timpson of Drafthouse Films have commissioned a limited press of only 666 copies of an illustrated storybook featuring verse narration from Zack Carlson. In addition to serving as a Badass Digest correspondent, Carlson hosts Terror Tuesdays at the Alamo Drafthouse Ritz in Austin, TX—one of the greatest movie theaters ever, which producer League also founded.

The press release from the Drafthouse webpage sums up the book nicely:

The ABCs of Death is a 56-page storybook guaranteed to entertain young and old alike with its hilarious, heartwarming tales of cannibalism, suicide, and life-or-death sex tournaments.

Adapting the film into a storybook seems like a natural evolution, as Timpson explains the movie's origin:

The idea for this unusual film sprung from a deep fondness of alphabet books from our [Timpson and League's] collective childhood. A little digging revealed that the books had a dark history, and that many early versions were used as punishment primers. In a sleep deprived state that was all the ammunition required for an epiphany of sorts. How about creating a film inspired by the alphabet?

The ABCs of Death is on sale now here and comes with a Blu-Ray copy of the film. Supplies are limited, so act fast!

Who here has seen the original movie? Excited to see this tongue-in-cheek companion on your bookshelf?