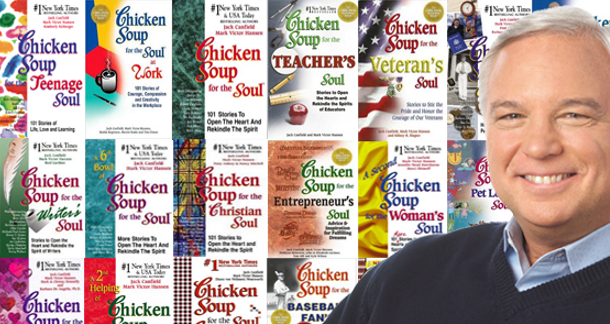 Yeah, I see you looking around at your friends and making that dumb laugh, pretending you have no idea what this article is about. I see right through you. Everyone capable of reading this article has probably at least heard of the Chicken Soup for the Soul books, and maybe read them. After all, there have been over 200 of the things. And if you read them, you probably enjoyed them, because even though they were campy, they were heart-warming and you know it.

For those of you who don't know (maybe because you aren't part of the largely American audience), the Chicken Soup books are collections of short stories, mostly passed as true, and they're generally supposed to make you feel good or at least teach an important Disney-esque lesson. Think of those emails you get from your grandmother who doesn't really know how to Internet which say, "Made me think of u" with a story about a boy who gets saved from depression by his dog, and you'll understand the general idea of what these books accomplish. Originally written by a couple of motivational speakers with a knack for uplifting stories, the books were hugely successful and a bit of a cultural icon of the 90's.

Anyway, that's all supposed to be ancient history, save for a recent news story that Warner Brothers is planning to make Chicken Soup for the Soul into a movie. How, or more importantly, why hasn't been discussed too much yet, but it's on the way.

Look, I can see this as a television series, but a movie? Unless... wait...

What if this is a dark, gritty adaptation of Chicken Soup? The poster will not feature the title, but rather just a spoon and a discarded bowl lying limp on the ground, splattered with what you hope is the remains of tomato soup. A fly circles in, its reflection in the spoon distorted and hideous, and the tagline... yes, the tagline...

No Soup for You.

You said it best, why? And what about the souls of the chickens in the soup? We don't like to think about that, do we?

I've never read any of these, but am familiar with their format. You're right, it would make a better TV series than a film. If it is short stories then it seems like it would be difficult to adapt into one coherent narrative.

They already made that show---it was called "Touched by an Angel"  :-/

Christina Re from the United States is reading something a friend wrote August 18, 2013 - 10:29am

If I were saddled with the task of turning this "storyline" into a movie, I'd follow along the lines of  Love Actually or New Year's Eve. A compendium of short stories with an overarching theme of love and relationships. And I'd make bank.