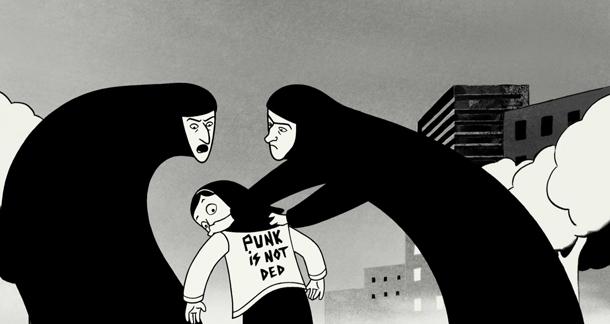 In a strange and altogether vague move, on Thursday Chicago Public Schools sent a directive to remove all copies of Marjane Satrapi's graphic novel Persepolis from every library in the district, The Huffington Post reports. Though never stated as such in the directive, The Chicago Teachers Union quickly labeled the "recall" for what it was—a ban—and protests were soon organized.

The following day, officials from CPS quickly denied that Persepolis was being banned outright. The Huffington Post's Joseph Erbentraut writes:

CPS CEO Barbara Byrd-Bennett explained Friday afternoon, via a statement reported by CBS Chicago, that the district has found the 'graphic language and images' of the text — which is included in the district's seventh graders' Literacy Content Framework — inappropriate for students of that age. She also denied that the book was ordered removed from the district's school libraries and said the book could be appropriate for students in eighth grade and older but, in the mean time, they have been 'temporarily recalled' from classroom libraries and district curricula.

Persepolis does indeed deal with some heavy, graphic content—specifically, scenes of torture in war-torn Iran—but the violence displayed in Satrapi's autobiographical tale is necessary, not gratuitous. Whet Moser of Chicago Magazine elaborates on this:

There is torture and violence in it, but Satrapi's style is extremely austere, so the portrayal is more stark and haunting than vivid. Which can be just as, or more affecting...

Moser goes on to say that Persepolis is no more "inappropriate" than other texts not on the chopping block:

It's chilling, but then again so's Shirley Jackson's "The Lottery," which ends—spoiler alert—with a woman getting stoned to death; it's also on the curriculum. There's also The Hunger Games, an excerpt from The Interrupters, and short texts on Trayvon Martin and Emmett Till, all of which deal with horrifying violence in their own ways.

In a statement, Chicago Teachers Union financial secretary Kristen Mayle speculated that the issue is a bit more political than meets the eye:

We understand why the district would be afraid of a book like this—at a time when they are closing schools—because it’s about questioning authority, class structures, racism and gender issues. There’s even a part in the book where they are talking about blocking access to education.

CPS has been relatively quiet on the issue since Friday, so we'll just have to wait and see how all this plays out. It strikes me as odd that a particular text could be inappropriate for 7th graders, but 8th graders and up are a-okay. That's not a huge leap in age. Also, shouldn't students who are more mature than others have access to books intended for older age groups? I was reading Schindler's List and Stephen King of my own volition at that age, and I wouldn't have liked it if school officials told me I couldn't because I was "too young."

What does everyone else think? Is this a censorship issue, or is CPS justified in limiting access to Persepolis?

That does it!  I'm definately getting a copy for my thirteen year old daughter.  It neve ceases to amaze me how reactionarry and ignorant school boards can be.  Maybe it's because they are in the business of training future consumers and not sharpening the minds of a future generation.

I have not read Peresopolis, but I'm going to.  If a school board has issues with it, then it must be pretty good.

Hmm. When I saw the headline I immediately wondered if Persepolis was pulled for a "religious sensitivity" issue. The claim about it's portrayal of violence being the reason doesn't quite stack up.

The book isn't just about questioning vague "authority." Persepolis, being an account of one person's experience, is very specific about what authority is being questioned. The antagonistic force consists of the followers of a conservative version of Iran's main religion, who have risen to power. The veil doesn't come off as the sign of faith that it might be for those who choose it freely. I can well imagine that there would be complaints from conservatives in Chicago's muslim community that this book might encourage Islamaphobia.

Sounds like censorship to me, which is horse shit even in the most well-intentioned instances. It's a quick fix. All it does is delay any movement toward real dialogue on a subject and stifle the potential positive change to society. It's particularly a disservice to children growing up up in a post-9/11 world.