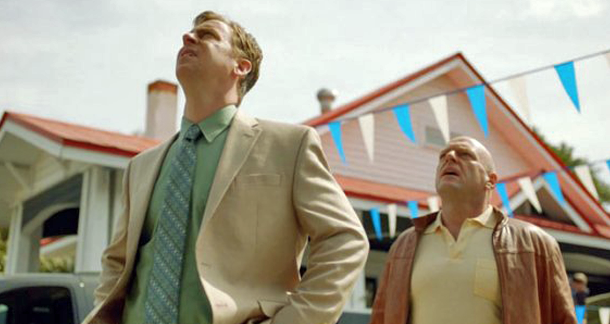 CBS has just released a new trailer with behind the scenes footage and clips from the TV adaptation of Stephen King’s Under the Dome, which tells the story of a small, New England town cut off from the rest of the world by a transparent dome.

Described as a show that's going to “knock your socks off” where things get "pretty scary very quickly", I think it’s looking good. "People's eyes are going to bug out of their head when they see it," King says of the show's visual effects. "It's going to be riveting TV."

Jack Bender (Lost), one of the show’s executive producers with Brian K. Vaughan (also Lost), was on an Under the Dome panel at WonderCon over the weekend and had this to say:

...this show is really a character show with a sci-fi element as opposed to the other way around. It's really examining people who are trapped in extraordinary situations, inexplicably impossible situations... Our writing team [has] developed characters that are extraordinarily rich and fascinating to follow under the microscope.

I can’t wait to see it — rumor says it’ll release in the UK shortly after the 24th of June US release date. What do you think?

It looks pretty cool to me. I haven't read the book.

Juice Ica from Rhode Island is reading The Twelve by Justin Cronin & Beautiful Creatures April 4, 2013 - 11:13am

I didnt love (or even like) the book (and Im an avid Stephen King reader) but I will certainly check this out, there are a bunch of good actors in here and the story might translate better on the TV Screen than in the book (the end seriously disappointed me).