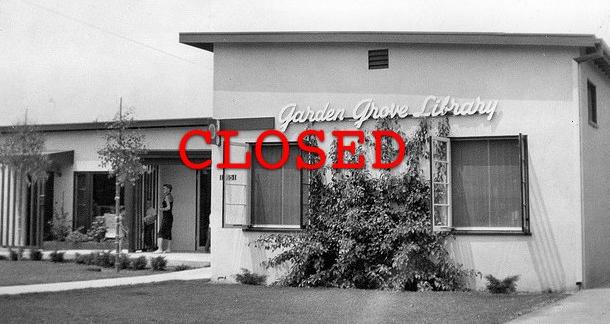 When the government is broke, nothing is sacred. Not even the holy temple of literacy and learning: the public library. At least, not in California.

It's a known fact that the Golden State is basically out of money, and that they're looking at anything and everything as a source of saved revenue. In recent years, libraries have become the target of many fiscal nips and tucks, as funding has slowed to a trickle. But as of next year, the public libraries of California will be entirely cut off.

Yup. The state isn't just skimming a little off the top anymore--they's eliminating funding to public libraries, altogether. In the 2013 budget, there will be no allotment for libraries. None. At all.

The lack of funding will impact literacy programs, as well as book buying and staffing--which means that librarians, who already have a tough time finding work in this economic climate, will be out of work.

Which raises an interesting question: if libraries are no longer publicly funded (by public money, like, you know, the kind the government gives out) at all, and instead entirely reliant on private donations to keep their doors open, what will change? In Seattle, there has been controversy over potentially censuring the internet in public libraries. Thankfully, because they are public establishments, the idea has mostly been stifled. However, if libraries become non-profits reliant on major donors instead, decisions like this may err on the side of caution, rather than freedom.

It remains to be seen which libraries will be able to remain open despite the lack of funding--though it's likely that those in neighborhoods where they are needed the most will be the first to go--but California lawmakers had better prepare for the backlash that's sure to follow this infuriating decision.

Rachel Harris from Cumberland Basin is reading mindless fluff (god, its so hard to get through, ugh) February 9, 2012 - 11:37am

of course politicans want to cut the population's access to information

wow - that's so disheartening - I wonder if people will have community libraries - like I could list what books I have and am willing to loan out, and same with other people who live in the nieghbourhood of my local branch.

I think the library is one of those institutions that people will keep running even if public funding is cut off. Occupy Vancouver ran a library, a medical clinic as well as a kitchen. Food, Health and Knowledge are things we should always share.

It's a sure sign that the one percent are winning. Only ignorant people will vote for politicians who support the great financial divide.