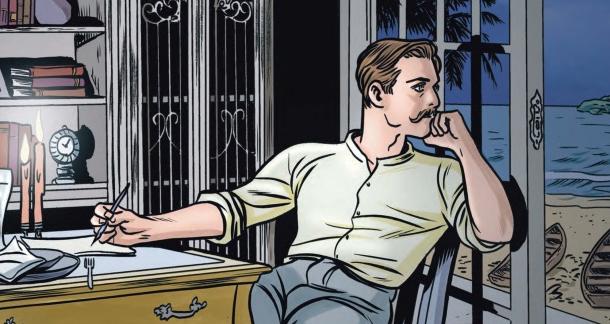 Just in case you needed a reason to drink while you read comics, Warren Ellis and Mike Allred have teamed up to create Spirit of Bacardi, a graphic novel depicting the life of rum maker Emilio Bacardi.

The Spirit of Bacardi is available here for online reading or PDF download (if you're over 21 or can do 2nd grade math). At one time there were plans to print the comic using rum in the ink, similar to a KISS stunt where members of the band added vials of their blood to a vat of red ink used to print KISS comics. However, at this point it's unclear whether the comic will see print or remain digital only.

Does the comic do a good job?

Sadly, no. It's little more than an ad, as one might expect. After reading this, one might be led to believe that Bacardi has been one of the biggest key players in Cuba's history. Not a person named Bacardi, but the beverage itself. 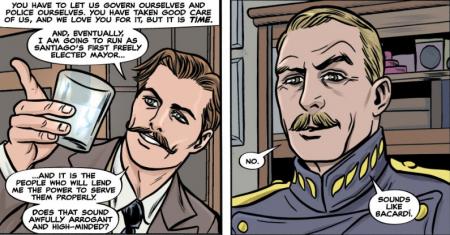 Which is sad when one considers some of the more interesting facts behind the Bacardi empire.

Fact: Emilio Bacardi and his wife wanted to purchase and bring home a mummy. They managed to find one owned by a private citizen, and they purchased it. Emilio describes the mummy like this: "She was pretty, and she is well preserved." When the mummy passed through Cuban customs, there was some argument about how to classify it, some officers insisting it was "art" while others wanted to classify it more literally as "dried meat."

Fact: There's a close connection between Bacardi and Ernest Hemingway. Hemingway was reportedly a fan (of booze? Shocker!), and Bacardi threw a party for Hemingway following his Nobel Prize award. Hemingway had this to say about rum drinks:

...this frozen daiquirí, so well beaten as it is, looks like the sea where the wave falls away from the bow of a ship when she is doing thirty knots.

The comic itself definitely reads with the subtext "easy money" for Allred and Ellis. But they've earned it. While The Spirit of Bacardi is pretty flat and boring, make sure to check out some of the other works by this duo. Ellis has written his way across the comics universe, and Allred has been both an indie darling with his Madman series and a Marvel stalwart with his work on X-Statix and FF. Hopefully this won't be the duo's last Super Team-Up. 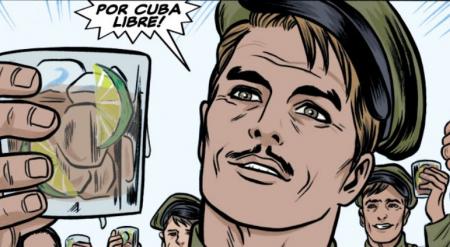 The beverage being a key player, comedy gold.

Community Manager
helpfulsnowman from Colorado is reading But What If We're Wrong? by Chuck Klosterman September 21, 2014 - 10:25am

They did do a less-than-subtle job of posing the question of whether many a person owes their freedom to Bacardi.