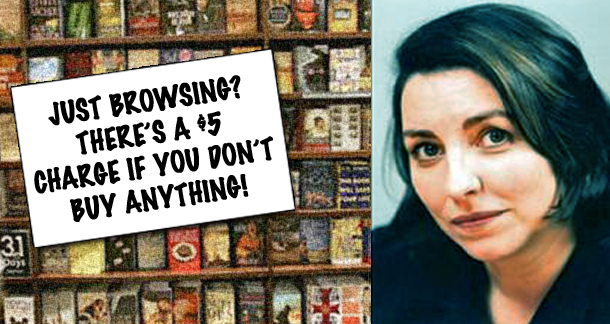 The shoe shops in the U.S. charging customers to try on shoes have made headlines across the world; I mean, it’s crazy, right? Does it put people off buying their shoes? Some retail experts think so. Well, Victoria Barnsley, CEO of Harper Collins seems to think brick and mortar bookshops may have to start charging patrons to browse titles in their shops and described the idea as "not that insane", particularly with the threat from online shopping.

Barnsley was on the BBC Radio 4’s The Bottom Line program on Saturday (9th February) with Kobo’s Michael Tamblyn and literary agent Jonny Geller to talk about the future of publishing when she suggested a fee to browse.

Citing a reported figure that only 35% of fiction in the UK is bought through a physical bookshop, Barnsley commented: "They are under enormous pressure," suggesting that asking customers to "pay for the privilege of browsing" was not an insane concept in the current environment… But she said the survival of the physical bookshop was "the big question". "Readers still do quite like physical books, the question is, will they be able to buy them, actually.

The trio also discussed eBooks, both pricing and market share, with Barnsley suggesting that it was likely to split about 50/50 between paper books and electronic versions. But they all agreed the low prices contribute to the threat to physical bookstores. Geller hit the nail on the head when he said: "If you're going to pay 20p for Life of Pi, which is a film, why would you ever pay £1?"

And that’s a good point. I can’t say I would pay to browse in a bookshop — I do still buy books in the flesh, but not every time I go into the store. Would you pay for the privilege of shopping in a physical bookstore or would that put you off, too?

I buy lots of books through browsing. If my local brick and mortars started charging, I would buy nothing from them.

Besides, I don't pay anything at the library.

Maybe that's what (many but not all) bookstores will become-- a sort of pay-by-the-hour library/wifi cafe/hangout spot.

Class Director
Rob from New York City is reading at a fast enough pace it would be cumbersome to update this February 12, 2013 - 8:10am

Speaking as someone who's in an indie bookstore every day (the office for my publishing imprint is in the basement) this seems completely and utterly insane.

It's hard enough to get people in the door as it is.

Joshua Chaplinsky from New York is reading a lot more during the quarantine February 12, 2013 - 8:22am

Man, when I worked at Borders, we used to bitch about the customers who would come in, grab a stack of books, and just sit and read all day (especially that weird dude who read nothing but gun guides), but I still think this is a bad idea. There is a difference between browsing and using the book store as your personal library.

Huh. So this is how bookstores die. Seppuku.

This is a bad idea.  I worked at Barnes and Noble, the last major book retailer left, and I'm pretty sure if we had put a sign on the door announcing a cover charge for browsing, the next sign to go up would be a sign that reads 'closed for good.'

Seriously, this is a cop-out.  As if gouging the customers is a viable way to make up for loss of revenue.

Yeah, any bookstore that charges me for the "privilege" for deciding if I want to buy merchandise from them is never going to make another dime from me.

Seems completely tone-deaf to me.  Brick-and-mortar stores are failing because they're down to pretty much two killer apps: atmosphere/convenience, and the ability to browse.  This single-handedly eliminates the only two remaining reasons reasons anyone has to go to a bookstore instead of buying online or going to a library.

On the bright side, if this becomes widespread, I won't have to feel guilty if I decide to abandon traditional bookstores to rot.

Ghostword from Cornwall is reading The Land of Laughs by Jonathan Carroll February 12, 2013 - 9:44am

Barnsley commented: "They are under enormous pressure," suggesting that asking customers to "pay for the privilege of browsing" was not an insane concept in the current environment…

So if expecting people to pay money just for having walked in the door of a shop is a sane concept, I'd love to know what the definition of a mad one is.

CEO of Harper Collins seems to think brick and mortar bookshops may have to start charging patrons to browse titles in their shops and described the idea as "not that insane", particularly with the threat from online shopping.

Um... that's exactly why it IS insane. If I am going to be out $5 whether I leave with a book or not, I simply won't go into the store, I'll buy the exact books I've heard of, or decided I need from an online store. If I can browse at will, I end up buying more books.

mind you, the local indie store (only one left in town I know of) absolutely requires browsing, because things are cluttered and kinda hoarder-ish-looking, and the owner claims he doesn't have books that I still manage to find.

there's no doubt bookstores need to help themselves to survive, but this kind of change is ridiculous.

I think combining the ordering power of bookstores with the atmosphere of cafes and the lending power of libraries is probably the way to go, but the logistics of such an endeavour is probably nightmarish.

5$ charge to keep bookstore activities running, or to stream a digital library maybe but to browse? No way!

Bookstores need to turn into 'learning-cafes"

What happens when you go in and they don't have the book you wanted? I'd have to pay to realize that they didn't bother to order the book? I still buy books at B&N from time to time, but it is rare because they rarely have what I went to purchase. Yup, I'd rather order online and not be bothered with a browsing fee. Dumb idea, seriously. I hope this doesn't catch on.

Silly. Perhaps there should be some sign about how bookstores are on the verge of collapse, and if you're browsing without buying, why not buy a coffee or something from the cafe? Perhaps bookstores with cafes are similar to movie theatres since I think theatres make most of their money off concessions since the movies are so expensive to rent.

It seems that many people here seem it's insane to charge to browse.  Working in retail I cannot tell you how many times people come to our store, try our products, and tell us face-to-face that they are buying the same item we have in store on Amazon for cheaper.  There is absolutely NO WAY that brick and mortar stores can compete with the may mass distributors on Amazon.  One service that real locations offer over Amazon is the ability to try before you buy, thus even if the customer buys on Amazon they are still paying for a service.  If you think everything should be free and you should get it for the cheapest price in China you need to get a real job and understand how things work.  If you are simply the demo room for Amazon you will go out business in a week.