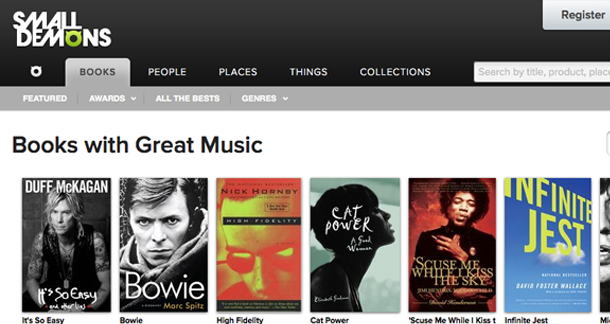 If you’ve got any sense of the internet startup world, you’ll be more than aware that they come and go — sometimes as frequently as buses — and it’s usually a lack of investment that kills them. A Los Angeles Times story yesterday announced that book connection startup Small Demons (which we reported on earlier this year after they signed a deal with Penguin) looks like it will be the latest casualty if a buyer isn’t found. They’ll be turning out the lights and closing their doors just before Thanksgiving.

Founded by Yahoo! veteran Valla Valkili (so he knows something about how these things work), the site works by showing all the connections between a book and the rest of the literary and non-literary world, music and technology (unsurprisingly) being a large part of those connections. It also shows how a particular book connects to other books.

The Small Demons page for David Foster Wallace's massive 1996 novel Infinite Jest includes hundreds of references. Click on the picture of one of the items that appears in the book — say, the Sony Walkman — and see how many other books mention a Walkman (672). It even shows a relevant passage.

I think the clever bit is how it’s tied into e-commerce, letting you buy the music that appears in a book. It also encourages the reader to go out into the world and find actual places and events they may have only experienced through the pages of their favorite novel. It’s a shame if it fails, as I think the premise is excellent. But as the song in Cabaret says, “Money makes the world go around.”

The interrelationships get dizzying, and the content is encyclopedic, with short descriptions of everything that appears. The company had raised $2 million in funding, and had been in talks with an international tech company that stalled. It will close its doors Nov. 25 — unless someone else steps forward with an offer between now and then.

It also proves that “footfall” isn’t necessarily enough. Have you used the site and, more importantly, will you be sorry to see it go?

JEFFREY GRANT BARR from Central OR is reading Nothing but fucking Shakespeare, for the rest of my life November 7, 2013 - 9:54pm

I used Small Demons quite a bit when it first started, but my use fell off, as it's not really indispensable for reading. I use Goodreads to track the books ive read, and post reviews, but other than that, I don't have much need for apps around reading. The time spent curating your app profile to keep it current is time taken away from reading.

Small Demons looked great, and had a 'cool' idea, but there are so many of those now, there has to be a better revenue model than Amazon affiliate payments.