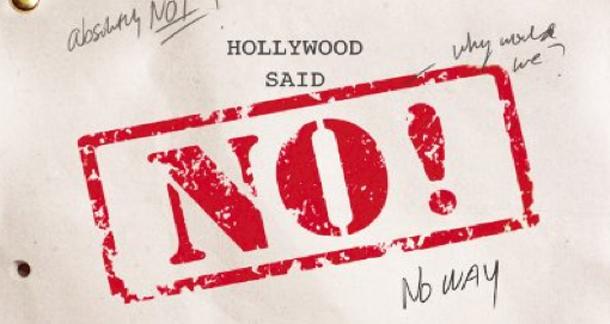 Mr. Show was hands down the Monty Python of my generation. Random, surreal, and often bitingly satirical, the HBO program helped to shape my own sense of humor, and as many times as I've seen all the episodes, I still end up dying of laughter every time I revisit them. So if you're like me, then the news that the show's creators Bob Odenkirk and David Cross are releasing a book of unfilmed sketches and scripts this September will surely make you stand up and thank the God you don't actually believe in.

It's called Hollywood Said NO! (an appropriate title, given that Odenkirk and Cross constantly butted heads with studio executives and producers), with the subtitle Orphaned Film Scripts, Bastard Scenes, and Abandoned Darlings from the Creators of Mr. Show. Here's more about the book from its Amazon description:

HOLLYWOOD SAID NO! reveals the full-length, never-before-seen scripts for Bob and David Make a Movie (fleshed out with brand-new storyboards by acclaimed artist Mike Mitchell) and Hooray For America!: a satirical power-house indictment of all that you hold dear. This tome also includes a bonus section of orphaned sketch ideas from the Mr. Show days and beyond, suitable for performance by church groups that aren't all koo-koo about religion. What you are looking at online, and are about to buy, is chock-full of comic twists, turns, and maybe a few hard truths. We said "maybe," but what we mean was "probably not.

Even the description is funny! Though I really only needed to know that Odenkirk and Cross are releasing a book of scripts. That sold it for me.

But the news just gets cooler: LaughSpin reports that Odenkirk, Cross and Mr. Show regular Brian Posehn (who also wrote a portion of the scripts) will set out on a mini tour to promote the release of the book. Each comedian will perform separate stand-up acts, as well as sketch comedy from all three. Here are the cities and dates:

But wait, there's more! For the audiobook edition of Hollywood Said NO!, most of the original Mr. Show cast is reuniting to record the previously dormant sketches. Bob Odenkirk even tweeted photographic evidence! No word on when that will be out, but when it is, I'm there.

Who else is a fan of Mr. Show? Are you salivating right now?