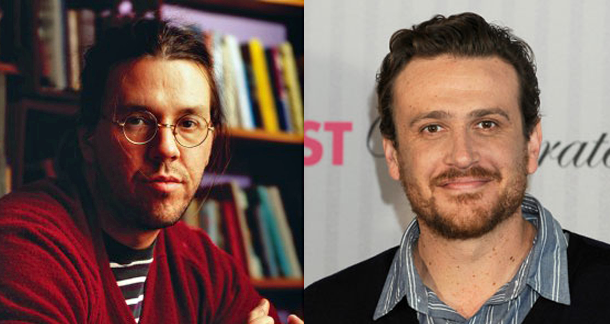 David Foster Wallace committed suicide in 2008, a tragedy on many levels, not least being the loss of one of the fledgling century’s most talented thinkers and writers. One who, if anything, has become more famous after his death. Plans are now being made to turn a book about his promotional tour for Infinite Jest into a biopic starring Jason Segal, probably best-known for playing Marshall Eriksen in the sitcom How I Met Your Mother.

Based on Although Of Course You End Up Becoming Yourself: A Road Trip With David Foster Wallace by Rolling Stone journalist David Lipsky, the film will be written by Donald Marguiles, a Pulitzer-winning playwright, and directed by The Spectacular Now director James Ponsoldt.

The 2010 book was written by Rolling Stone journalist David Lipsky, and is what it says on the tin: an account of a road trip with the author as he went across the US promoting his 1,100-page novel Infinite Jest, recalling the conversations the pair have and the fame that Foster Wallace is starting to experience. Jesse Eisenberg, who played Mark Zuckerberg in The Social Network and starred in Now You See Me earlier this year, will play Lipsky.

It’s a bit of a departure for Segal whose work until now seems to have largely been comprised of comedies of one sort or another, including The Five Year Engagement, Forgetting Sarah Marshall and Sex Tape with Cameron Diaz, but who knows? Maybe he’s looking to change direction at the same time adding to the Foster Wallace canon.

The film is another posthumous addition to the Foster Wallace legend. He became one of the most celebrated writers in the US for his work which blended leftfield observation and pop-cultural savvy with big-hearted emotional heft, before he committed suicide in 2008. Since then his profile has arguably grown greater, with a biography by DT Max, Every Story Is A Love Story, published last year and even his minor work reissued – his early essays on hip-hop, Signifying Rappers, were published last month. His 2005 commencement speech for Kenyon College, This Is Water, has also been widely circulated since his death.

It will be interesting to see how it plays — and how it’s received — as films about authors aren’t generally the sort to capture the public imagination. Is this a fitting tribute to Wallace? Time will tell.

There were people on my FB feed who were apparently upset, or at the very least derisive, about this casting choice. I don't see what the problem is. I like Jason Segal and I really like casting comedic actors in serious roles.

As someone who has flirted multiple times with actually picking up and reading Infinite Jest, I will definitely watch this.

Edit: Also is it just me or does Dean's picture make him look sort of like an alternate universe Glenn Beck?

Joshua Chaplinsky from New York is reading Stories of YOUR Life December 13, 2013 - 8:03am

Unless Wallace had a habit of dropping trou and waving his dick around, I'm not sure how they settled on Segel.

I can see Segel pulling off a decent DFW. This sounds cool as long as they can get the tone of his humor right.

I think Infinite Jest is one of the top five books I have ever read. I like all of the essay books. That being said, I have no idea what DFW's mannerisms are like. Everything I know about his personality I know from reading his books and reading a few interviews. I would have a hard time argueing with any casting choice. It seems a bit silly to complain about who is going to play an author on TV.