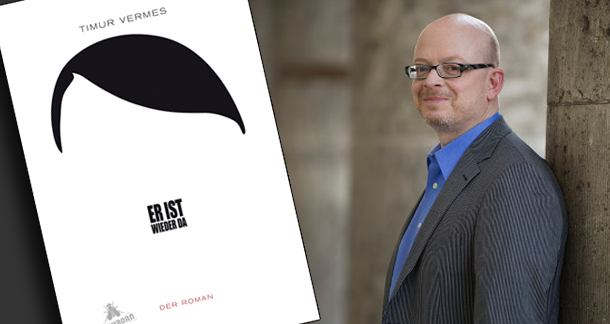 It’s the 80th anniversary of Adolf Hitler’s rise to power and a satirical novel about the dictator and the cult of personality following him would seem an unlikely way to remember him. But first novel Er Ist Wieder Da, or He's Back, by Timur Vermes is proving a success on the wave of commemorations currently taking place in Germany.

The novel’s at the top of the charts, beating off more seasoned writers like Ken Follett and Paulo Coehlo to sell over 400,000 copies — it’s already been licensed for 17 international editions.

In Vermes’ story, Hitler falls asleep in 1945, ala Sleeping Beauty, and wakes in Berlin circa 2011 where he becomes a celebrity, “before entering politics where he campaigns against dog muck and speeding”.

'The fact is we have too much of a stereotype of Hitler,' he told German media. 'He's always the monster and we can be comforted by the fact that we're different from him. But in reality he continues to spark real fascination in people, just as he did back then when people liked him enough to help him commit crimes… I want to show that Hitler would have a chance to succeed nowadays just as he did back then, just in another way,' said Vermes.

A ghostwriter by trade, Vermes explained that Germans “appear to be obsessed by him” and the book is deliberately confrontational. The response from critics has been mixed.

'We laugh but it's a laugh that sticks in the throat,' wrote Die Süddeutsche Zeitung. '… Vermes satirises this 'Hitleritis', but his novel draws on it as well and even lends it a new dimension, that of not laughing about Hitler, but with Hitler.'

I wonder if 80 years is long enough to laugh about what one man did to the western world. But I may well read it when it’s published in Britain next year. Does anyone else plan on reading it?

I'd read it. I think he has a point, people FREAK OUT when they see photos of Hitler doing normal everyday things. I saw a photo of him walking down a path outside holding a little girl's hand and everyone reacted like it was a photo of him personally killing someone. The extreme reaction may be deserved, but if it serves to separate him from the rest of humanity, it also serves as a security blanket, making us feel safe when we may not be.

He was human. That means other humans can be as bad (some have been since his death, just not on such a large scale).

what one man did to the western world.

Statements like this both reflect and reify the mythology.

I think we must continue to examine the evil that Adolf Hitler symbolizes.  I'm interested in reading Mr. Vermes work to get his take on the Hitler mystique.  And yes, I do worry that it could happen again.

People's reactions to most things Hitler seems to be part of the their process of excluding themselves from him and the terrible things he did.

It would be scary to live in a world where we identify with him too much. Seeing him isnt like looking at just any person, you're looking at a symbol when you see him.

I dont think that we should laugh at what he did, but perhaps we could laugh at the thought processes that allowed someone like him to come to power.

Firstly, I agree with J.Y. To make believe that Hitler somehow did it all by himself is both false, and a rather dangerous thing to believe. Leaders can never do terrible things by themselves, and I think that's the point. We like to think we've evolved past letting new Hitler's rise to power. That's why we need books like this one. I'd certainly read it.

This also reminds me of a German film I watched recently, called 'The Wave' (Die Welle). It explores how easily fascist regimes gain power, and how unwise it is for people to think 'I could never do that'. I admire how honest the German people are about their past, and how they don't turn away from it. The fact that Berlin is remembering Hitler with exhibitions and talks throughout this year shows that they understand how important it is to examine what happened. I don't think England would ever educate its people about the atrocities of our past with the same openess.