Ben Affleck No Longer Attached To 'The Stand' Remake, New Writer/Director In Talks 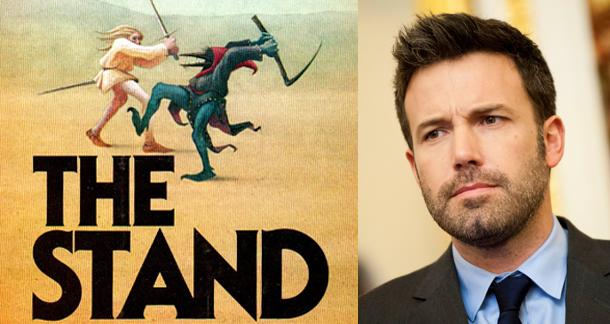 Ben Affleck is a little busy at the moment. He's playing Nick in David Fincher's screen version of Gone Girl; he'll adapt (and probably star) in Dennis Lehane's Live By Night after that; then he's doing some comic book thing in 2015. His plate is piled so high with adaptation lasagna, Affleck is no longer the front-runner in that long-gestating remake of The Stand reportedly still happening over at Warner Bros. The studio executives now apparently have their eyes on Scott Cooper, the writer/director behind Crazy Heart, which garnered a Best Actor Oscar for Jeff Bridges, and the upcoming Out Of The Furnace, which stars Christian Bale as a man who becomes a vigilante following a loved one's death (not Batman).

No news on whether this new version of The Stand will be one film or multiple. The original miniseries based on King's very thick novel was comprised of six hour-long episodes, and by all accounts adapted the work faithfully (haven't actually read it; I know, shame on me), so we should probably expect a trilogy attempt here, but you never know.

I've yet to see Crazy Heart, so I can't exactly weigh in on Cooper's potential involvement, though I think Bridges might make a pretty good Randall Flagg. Thoughts?

Jeff Bridges as Randall Flag? That would be interesting.

The Dude becomes The Walkin' Dude?

He's a great director, but I guess he's trying to boost his acting career a bit more. I'm still a bit miffed about the remake, but maybe it'll be awesome? My brother used to regularly re-watch the original when he lived with me, so I've grown pretty attached to it :)

Dwayne from Cincinnati, Ohio (suburbs) is reading books that rotate to often to keep this updated September 7, 2013 - 10:50pm

Orginal was pretty solid, but this could be good. I know they'll need to tweak a few things but I hope they don't mess up the focus or the ending.