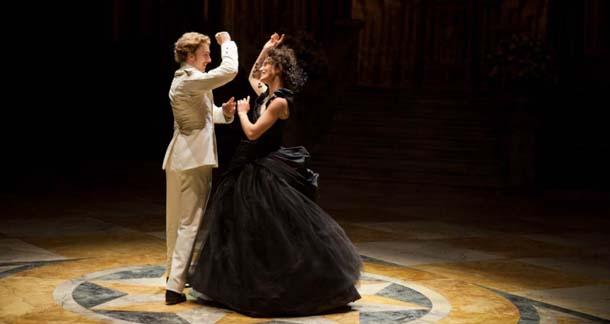 And here, we have the trailer for the film adaptation of Leo Tolstoy's epic story of Russian people pretending to be French, Anna Karenina.

I know there's some universal law that says Keira Knightley must be cast in the film version of every female-driven literary classic, but I always pictured Anna as a bit zaftig. Also, Aaron Johnson as Vronsky? Not feeling it. Should have been Jon Hamm. And why is everyone suddenly British?!

All that aside... I don't hate this. I like the visuals. Director Joe Wright has made the gutsy move of setting the entire story in a theater. For a book as sprawling as this, that's one way to make it a little more concise. I can get on board with it.

We'll see. Film hits theaters Nov. 9. What do you think?

I'd had this book on my shelf for some time and finally decided to read it when I heard the movie adaptation was coming. I have to say I'm looking forward to it and I agree on the visuals; I´ve always loved the way Seamus McGarvey photographs.

The Keira Knightley bit is true, yet we have to admit that she is good with the old timey roles... except on 'A Dangerous Method'.

This does look very very pretty. But... yeah. I'm not buying Keira Knightley as Anna. I just don't think she has the maturity for the role. That being said, I will definitely be seeing this.