Bed and Breakfast On Sale for the Price of 200 Words 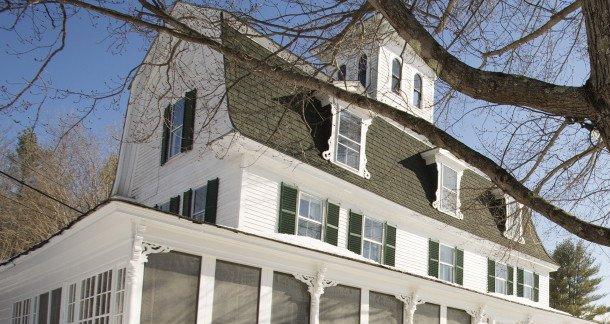 Image by Carl D. Walsh via the Portland Press Herald

Over two decades ago a couple in Maine auctioned off the Center Lovell Inn and Restaurant to the winner of an essay contest. Years later, that winner is set on doing the same thing, reports the Portland Press Herald. Janice Sage, the current owner, has plans to retire, and is selling the quaint bed and breakfast for the price of a $125 entry fee, 200 word essay, and a postage stamp.

As outlined on the contest website, the essay prompt is simple: you must explain why you would like to own and operate a country inn. The winner will inherit the lovely 210-year-old, 12-acre estate overlooking the White Mountains.

The original contest in 1993 received a wide array of media attention, even being featured on the “Phil Donahue Show.” Although Sage might not draw in the same amount of notice as before, she does hope to garner at least 7,500 responses. This sum would add up to the same amount as the suggested listing for the property. Sage will also use the funds to achieve her goal of retirement.

Sage’s plan is to weed the entries down to 20 finalists. The top picks will then be sent to two outside judges, who will pick the winner. The entry deadline for the essay contest is May 17th.

Why is Sage choosing such an alternative route to unload the inn? “There’s a lot of very talented people in the restaurant business who would like to have their own place but can’t afford it. This is a way for them to have the opportunity to try,” she told the Herald.

I sure hope Sage finds a writer who will love the Center Lovell Inn as much as she did! Is there anyone out there in the ‘Verse who’s tempted to submit?