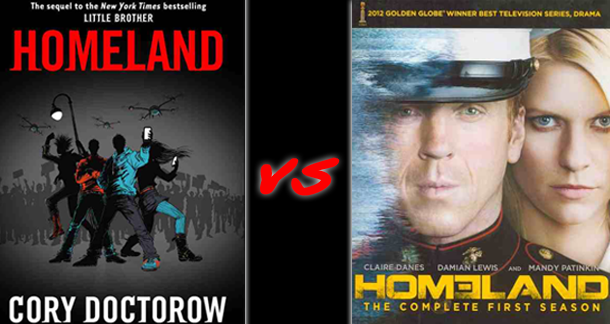 See? This is one of the problems with using the same title as an existing property: you get mistakes and individuals talking at cross-purposes. The latest victim is journalist and author Cory Doctorow, who published a new novel, Homeland, which, if you watch any TV you’ll probably know is the name of a popular series about a guy who may or may not be a terrorist.

Well, Homeland (the TV series) is also made by 20th Century Fox, owned by one Rupert Murdoch, who aren’t very keen on illegal file sharing at all. They send regular DMCA takedown requests to Google to get links to those illegal download sites taken down. In the process they’ve inadvertently asked for links to Doctorow’s book to be taken down too, a “gross abuse of his rights” the author is not happy about.

"I think you can safely say I’m incandescent with rage. BRING ME THE SEVERED HEAD OF RUPERT MURDOCH!” Doctorow says.

The book, a sequel to his popular Youth book Little Brother, “tells the story of an infowar, the suppression of information and the fight against censorship.” So, it’s not really about terrorists, then, just censorship. And, in line with his policy of offering his work for free, has been released under a Creative Commons License as well as the hardback version produced by Tor Books. The irony of this is that Tor have been sending takedown requests for one of Doctorow’s other books. (Sorry, what?) This is due to the fact that yes, some versions of Doctorow’s books do come with DRM installed. The author is more philosophical about that.

"I think what I’d like is for Tor to be perfect in only sending out takedowns when there’s a genuine violation, but perfection is a pretty high bar. I’m sorta OK with settling for one mistake in 10 years, especially if it doesn’t happen again,” Doctorow said.

Is anyone else confused here? Fox is bad, Tor is not bad, just accident-prone? I understand what he’s trying to do as an author and that’s get his books out to as many people as possible, the goal of most authors these days. But if, as Tor says, having Creative Commons deals with authors is working for them, why are they getting uptight about downloads? I’d like to see them relax and get on with it, but yeah, Fox should know better.