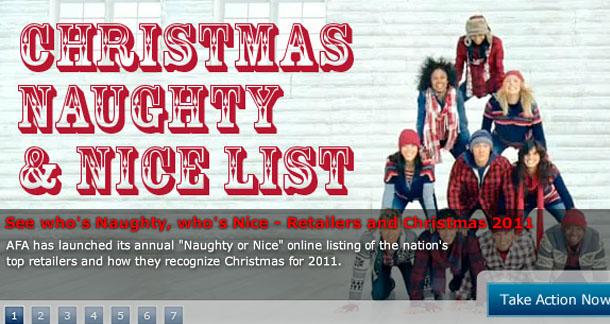 The American Family Association, the Conservative Christian group, took a little break from hating gay people so they could release their annual "Naughty and Nice" list, which rates retailers' holiday marketing.

Their rating is based on whether the retailer uses "Merry Christmas" or "Happy Holidays" in their ads. "Happy Holidays," of course, being a dirty, ugly, offensive term that takes the focus of the season away from Baby Jesus, where it belongs.

Barnes & Noble made the "naughty" list along with 14 other retailers, like heathen clothing-retailers Banana Republic and Old Navy. Among those on the "nice" list: Wal-Mart, Target and Amazon. Starbucks, Bath & Body Works and Whole Foods made the "marginal" list, which means they like Christmas, but they don't love Christmas.

Mary Ellen Keating, a spokeswoman for B & N took some exception to AFA's ranking:

"We do in fact have references to Christmas in our stores... The holiday season includes more than Christmas. Therefore, our overall theme has always been Happy Holidays."

So there you have it. Barnes & Noble, the big-box book retailer, hates Jesus. And probably America and freedom and apple pie.

Oh, and before I forget, to everyone at the AFA: Have a happy and healthy Kwanzaa!

EricMBacon from Vermont is reading The Autobiography of a Corpse December 15, 2011 - 3:31pm

The most commonly celebrated parts of Christmas are either pagan or capitalism so who cares? I hate even being bombarded by Happy Holidays bullshit everywhere I go after Halloween. I refuse to go to a mall in December, and I will not appease those damn bell ringers. I am a charitable person all year long, I don't need someone in my face for my change from the grocery store. I don't even use cash!

Joshua Chaplinsky from New York is reading Stories of YOUR Life December 15, 2011 - 6:13pm

Tis the season for immaculate conception and molestation from the holy ghost.

I don't know about you but I'd be pissed if God had sex with my wife and knocked her up.

Dwayne from Cincinnati, Ohio (suburbs) is reading books that rotate to often to keep this updated December 15, 2011 - 8:53pm

Guys I understand people who both come across as religious extremists who disagree with you on most everything are exasperating, to say the least. I understand most folks don't hate Christians, even when we get on your nerves.
At the same time scornful comments that involve others faith, even in jest, are the fuel the misguided/unscrupulous use to raise funds/gain influence/manipulate the faithful.

One of my goals is to write a novel that is publicly denounced by the AFA. Nothing would make me more proud.

Kasey from the morally and physically challenging plains of Texas is reading 12pt. Courier font December 16, 2011 - 10:16am

Time for my yearly dose of xmas mind vitamins:

Fact: Jesus was not born on December 25th, couldn't have been becuase the shepherds were outside with their sheep - look at historical weather data for Israel in December - bitter cold and rain - shepherds and flocks were inside. Cited source: M’Clintock and Strong’s Cyclopædia says: “The observance of Christmas is not of divine appointment, nor is it of N[ew] T[estament] origin. The day of Christ’s birth cannot be ascertained from the N[ew] T[estament], or, indeed, from any other source.”—(New York, 1871), Vol. II, p. 276. AND The book Daily Life in the Time of Jesus states: “The flocks . . . passed the winter under cover; and from this alone it may be seen that the traditional date for Christmas, in the winter, is unlikely to be right, since the Gospel says that the shepherds were in the fields.”—(New York, 1962), Henri Daniel-Rops, p. 228.

Fact: December 25th *was* a holiday, but not a Christian one. Cited source: The Encyclopedia Americana: “The reason for establishing December 25 as Christmas is somewhat obscure, but it is usually held that the day was chosen to correspond to pagan festivals that took place around the time of the winter solstice, when the days begin to lengthen, to celebrate the ‘rebirth of the sun.’ . . . The Roman Saturnalia (a festival dedicated to Saturn, the god of agriculture, and to the renewed power of the sun), also took place at this time, and some Christmas customs are thought to be rooted in this ancient pagan celebration.”—(1977), Vol. 6, p. 666. AND The New Catholic Encyclopedia acknowledges: “The date of Christ’s birth is not known. The Gospels indicate neither the day nor the month . . . According to the hypothesis suggested by H. Usener . . . and accepted by most scholars today, the birth of Christ was assigned the date of the winter solstice (December 25 in the Julian calendar, January 6 in the Egyptian), because on this day, as the sun began its return to northern skies, the pagan devotees of Mithra celebrated the dies natalis Solis Invicti (birthday of the invincible sun). On Dec. 25, 274, Aurelian had proclaimed the sun-god principal patron of the empire and dedicated a temple to him in the Campus Martius. Christmas originated at a time when the cult of the sun was particularly strong at Rome.”—(1967), Vol. III, p. 656.

Fact: The "Wise Men" or Magi, were in fact astrologers, if you look to the original texts, before their titles were watered down to suit the needs of the ruling class that sought to unite the pagan and the Christian.  So if these men were astrologers, why would God "guide" them to his Son?  What was the Bible's view on astrology?  Matthew 2:1-16 shows that the star led these "wise men" to Herod first and then to Jesus.  Oh by the way Herod was seeking to kill Jesus.  Then an angel warned Joseph and Co. to flee to Egypt, because Herod was looking to have this pesky messiah killed.  And since Herod couldn't locate the boy, he said, "Well, lets just be safe and have every male child under the age of two killed."  So that little star they put on top of their Christmas tree? Yeah, that wasn't from God...

Fact: They can't just say, "Oh, we know it's outdated/outmoded, but we do it for Jesus... and the kids."  Have anyone you know who takes this tack read the following in their (probably unopened) Bible: Ephesians 5:10,11 - or- 2 Corinthians 6:14-18, -or- my personal favorite precedent: Exodus 32: 4-10 where the Isrealites wanted to do what those fun-loving (and decidedly pagan)  Egyptians were doing, so they found (or so they thought) a clever way around this, to have their cake and eat it too, they just re-branded the festivities (and the golden calf they made, just like the Egyptians) and said, well, instead of doing this thing You detest to some pagan god, were doing it for you, Lord.  Well, He didn't buy it, to the tune of 3000 dead and some plagues thrown in for good measure.  Why should He view Christmas, a far more aggregious offense in His son's name, any less?

Again, living in the morally challenging environs of North Texas, where megachurches and idocracy reign, I run into these types every single day.  The irony of those who profess to be "Christian" and the gulf that seperates their actions from the very person they claim to be associated with, is not lost on me.  It really is sad that someone can be so rabid and yet be so wrong.

Class Director
Rob from New York City is reading at a fast enough pace it would be cumbersome to update this December 16, 2011 - 8:57pm

Way to ruin the magic of the season, Kasey. Next you're going to tell us that evolution is real.