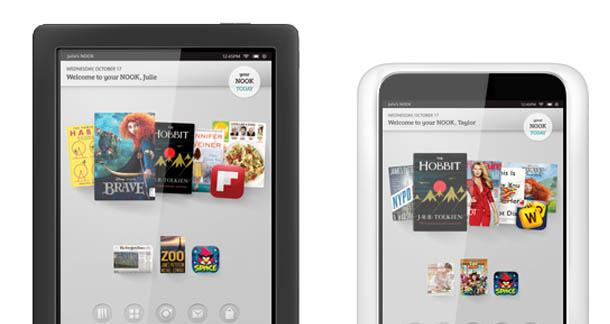 Hot on the heels of announcements earlier this month of new Kindles and Kobo devices, Barnes & Noble debuted some new hardware: A 7-inch Nook HD, and a 9-inch Nook HD+.

According to The Huffington Post, the 7-inch model boasts a resolution of 1440x900, slightly better than the Kindle Fire HD. It's also lighter than the comparable Kindle model, and will cost $199 for an 8GB model and $299 for a 16GB model.

All the new models have options for expandable storage, and will ship in late October. The HuffPo writer said that the touchscreen on both models was a little janky, though the folks at B&N insist that'll be cleared up by the release.

You can learn more about the new models at HuffPo and at the Nook website.

They look nice and they're competitively priced. They're clearly a shot across the bow at the Fire and the iPad. The question is, will they work? Do you see anything here that sways you over to Barnes & Noble? Nook users--does any of this encourage you to upgrade? Will any of this matter when the rumored iPad mini is released?

I love the expandable SD memory slot, but it doesn't say what operating system it's using.  The nexus 7 has the edge there, because I want an Android operating system (so I can run stuff from all the stores).

Still, a 9 inch for that price is tempting.  I'm holding off for a 10-11 inch (since it's mostly for games and comic books for me).