Barnes & Noble Introduces A Nook You Can Read In The Dark 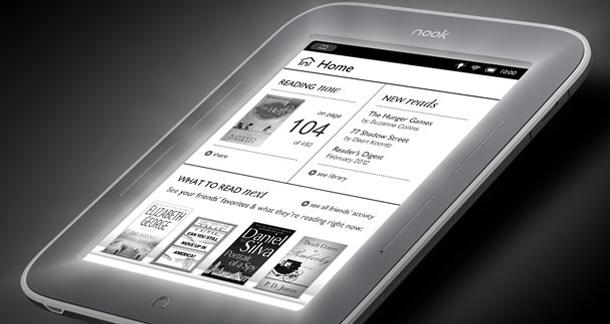 Tired of using a clip-on light to use your eReader in the dark? Is your significant other threatening divorce because the glow from your iPad is keeping him or her awake?

Barnes & Noble has you covered. The retailer has announced a backlit eReader: the Nook Simple Touch with GlowLight. It costs $139 and will ship out in May.

PC Mag got some hands-on time with the device, and came away with a favorable impression:

Reading with the GlowLight is enjoyable—and, honestly, preferable to using a clip-on light. Without it, it's the same as before, but with it, you can now read in the dark while your significant other sleeps peacefully nearby. If you're really being picky, you may want it even dimmer than the dimmest setting, but to my eye it looked like it would go dim enough that it wouldn't disturb another sleeping person.

Barnes & Noble has struggled for attention when it comes to the Nook--the iPad and the Kindle family dominate the eReader industry. Getting this model out front was a smart move on their part. Now, the big question is: Are people clamoring for backlit eReaders?

Personally, I love my Kindle, and prefer it as an eReader over my iPad. The iPad is big and heavy and expensive, where as the Kindle fits in my pocket, weights nearly nothing, has a marathon battery and plenty of storage. But I wish I could sit outside on my balcony and read it at night. A backlit eReader seems like a common sense solution--Amazon is even working on their own right now, according to reports.

The big question is what this will do to battery life, especially since the robust power supply is one of the biggest advantages of the e-ink display. Barnes & Noble claims readers will still get long-lasting battery life, but we'll see if that pans out.

Is anyone excited about this, and willing to give the Nook a try--or upgrade--to get this feature? Or is Barnes & Noble gilding the eLily?

I have a Nook Classic and it's been my faithful eReader for over a year. I simply love it. Now that this new Nook has built-in light, I think I'll buy it so I can read in bed while my girlfriend sleeps.

I have the Nook Simple Touch and it has FANTASTIC battery life. The back-lit is supposed to be slightly less and you can turn the back light off in the daytime.

And yes, lots of people have asked if the Simple Touch is back-lit.

Amazon's supposed to come out with one this year as well.

I always love the jabs that Rob and Brandon give to Barnes & Noble. It's cute.

And the iPad's not an e-reader.

Class Director
Rob from New York City is reading at a fast enough pace it would be cumbersome to update this April 20, 2012 - 1:04pm

The iPad is capable of being used as an eReader. In fact, it's quite popular as a reading device.

And, where in this did I take a jab at B&N? Was it when I praised them for making the smart move of releasing a backlit eReader ahead of the competition?

Yes, it can read e-books but it's still a tablet and really should only be compared to the Nook Tablet/Color and Kindle Fire...which of course the iPad would easily win on what it's capable of.

Any maybe it wasn't intentional on your part but I took this as a jab.

Not to mention, you couldn't help but talk lovingly about the Kindle you own. Maybe you could have done that when Amazon DOES come out with their own back-lit e-reader.

B&N has sold tons of Nooks and it's really a great product. Amazon will have a huge lead for some time due to the fact that they came out with the Kindle two years before B&N came out with the Nook and I don't fault anyone who doesn't want to switch over since Amazon doesn't do e-pub. And iPad will do well because it's Apple and every Apple fanboy has to own everything that they come out with.

As for me, I will not upgrade. I never read in low-lit situations.

Class Director
Rob from New York City is reading at a fast enough pace it would be cumbersome to update this April 20, 2012 - 2:06pm

To say the Nook has struggled is not a jab, it's a statement of fact. It's not nearly as ubiquitous as Amazon or Apple products, and it has yet to rescue B&N from the company's financial issues. But, it's good that they're improving upon an existing product with a common-sense upgrade--which is why I tipped my hat to them.

And the reason I talked about my Kindle was because, through that, I'm familiar with e-ink technology, and the drawbacks of a screen without a backlight. Because of that familiarity, I'm able to call a backlit eReader a common sense solution. Another tip of the hat to B&N.

The Nook is a good product. I've held it and I've used it. I haven't read a book on one, so I can't speak authoritatively about it.

And finally, the iPad gets a seat at the table since, when you look at tablets and eReaders and eBooks in general, the only fair way to parse it out is through selling points. The Kindle Fire and the Nook Tablet are closer to the iPad in fuction, but they're also supported by e-ink devices. And they're both hooked into their own stores.

Apple only puts out one type of device (in varying sizes and internet capabilities; iPhone, iPad, iPod Touch), so to disregard the iPad as an eReader--especially for a company that has a proprietary bookstore--is going to skew the discussion.

The funny thing is, is that since the Nook came out, B&N's digital/online has done exceptionally well but now store sales have gone down and yet, they expect the stores to meet the same sales goals for the shareholders.