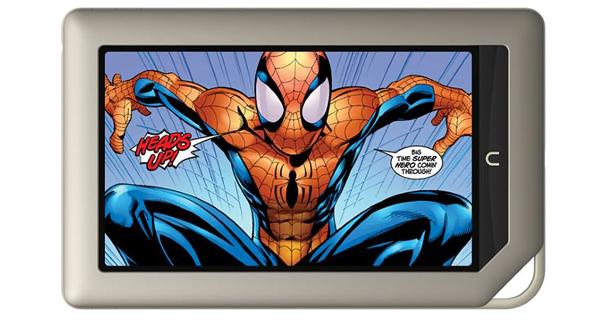 If you're in the market for a tablet eReader, especially with the holiday season coming up, you just got another option: Barnes & Noble has announced the Nook Tablet, positioned to rival the Kindle Fire and the Kobo Vox.

The new tablet will be the same size as the Kindle Fire, but will be a good clip faster, boasting 1 GB of RAM, as opposed to the scant 512 MB in both the Fire and the Vox. Of course, with extra speed comes additional cost: The Vox and the Fire are both marked at $199, while the Nook Tablet will set you back $249.

The Nook Tablet will do pretty much the same stuff as the other eReader/tablet hybrids hitting the market: read books, browse the web, send e-mail. It has 16 GB of memory, cloud storage, and, most importantly, Angry Birds! Barnes & Noble has also signed content partnerships with the likes of Hulu, Netflix, and Pandora.

What about comics, you ask? Barnes & Noble said it'll have the largest collection of Marvel comics on any tablet device. I'm still trying to find details on that agreement, and what that means for the other tablets and comic-reading apps. At first blush, it reads as a big 'screw you' to Amazon. When the Fire was announced, Amazon bragged that it would come with exclusive content from DC Comics. Barnes & Noble responded by pulling DC from the shelves of their stores (although not from their website).

So, there you have it. The latest volley in the tablet wars!

Barnes & Noble also announced some price reductions. The Nook Color will drop to $199 from $249, and the Nook Touch, currently priced at $139, will retail for only $99.

The Vox is available right now. Barnes & Noble is taking preorders on the new tablet, which will hit stores next week--the same time as the Fire.

Frederick from Southeast Connecticut is reading Sex, Drugs, and Cocoa Puffs By Chuck Klosterman November 8, 2011 - 11:24am

Great article, Rob. I just conducted further research on this and I am very excited. I went on a several sites where they were compared. CBS news and Tech Talk were great. The Nook Tablet comes out November 18th and can be pre ordered now!

Joshua Chaplinsky from New York is reading a lot more during the quarantine November 8, 2011 - 11:28am

Are all eBooks you can buy for the Nook and the Kindle also available for the iPad? Cuz I've been thinking about getting an eReader/tablet, and if I'm gonna spend the money, I might as well get the super-toy.

Is wellhello real without any obligations has since a long time prior halted to be seen as something profane and supporting judgment. Many are thoroughly content with their free status, which they may not really need to surrender just for sex, especially in case you slant toward parties all the while, moving accomplices.